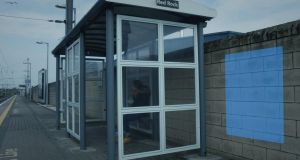 A shot from TV3 soap ‘Red Rock’ with a blue box tag in which an advertising poster can later be digitally added. 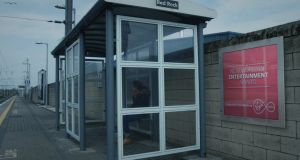 The same shot with a Virgin Media advertisement added in post-production.

Irish television’s first digital product placement will appear in an episode of TV3’s Red Rock on Monday, with a poster advertisement for TV3 owner Virgin Media popping up in the background of scenes.

Digital product placement allows broadcasters to include current advertising campaigns in episodes of non-live programmes filmed weeks or months before.

Virgin Media decided to become the first brand to avail of it. Viewers will spot a poster from its out-of-home campaign, with the tagline “a new world of entertainment awaits”, appearing amid the high drama of Red Rock from next week.

Paula McCarthy, head of sales for Virgin Media Solutions, described the technology as “game-changing” for product placement. “We look forward to developing new opportunities for brands across TV3 Group.”

Other product placement in Red Rock includes the presence of a Costcutters shop, although unlike the Spar in RTÉ’s Fair City, the characters have not been seen shopping inside.

Mirriad, which has offices in London, New York, Mumbai and Shanghai, says it creates advertising opportunities “for the skip generation” – the generation that will do anything it can to avoid having to sit through advertising.

Its digital product placement techniques have previously been used in Australian soap opera Home and Away and on mugs used by contestants on Channel 4’s game show Deal or No Deal.