Also on the podcast, assurances from Ulster Bank on security of Apple Pay 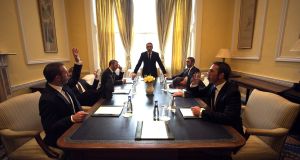 The boardroon. A “cause of concern” is how Ed Sibley of the Central Bank has described its research on diversity in Ireland’s financial institutions.

A “cause of concern” is how Ed Sibley of the Central Bank has described its research on diversity in Ireland’s financial institutions.

The bank’s director of credit institutions supervision told this week’s Inside Business podcast that the study is the first of its kind and its results reflect a poor picture of diversity in the sector.

This research is a step towards tackling the problems that lead to poor levels of diversity, he said, and will send out the signal that the regulator takes it seriously.

Also on the podcast, Ulster Bank is one of just two Irish banks now offering Apple Pay to its customers.

Director of customer experience and products at the bank, Maeve McMahon, joined Ciara O’Brien from the business team to discuss the service and said she has no concerns about its security.

In terms of becoming a cashless society, Ms McMahon said Ireland isn’t quite there yet but the launch of Apple Pay, coupled with Android Pay a few months ago, does bring it closer.