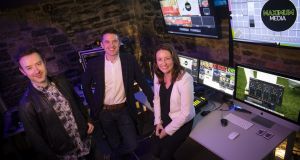 At Maximum Media’s premises on Fumbally Lane in Dublin there’s a smell of fresh paint and strong coffee. Two red sofas, surrounded by a ring of HD cameras, are laid out before a SportsJOE branded backdrop.

There’s no show currently like it on linear television in Ireland, leaving the field clear for Maximum, the website publisher in the process of reinventing itself as a broadcast company.

“Sport is a great place to start,” says McKenna. This Wednesday at 9.30pm, SportsJOE Live will stream on Facebook Live, Periscope and Maximum’s own sites, the expectation being that the company’s youthful audience will watch it on their mobiles with the same readiness that older generations sit down to watch traditional television.

McKenna places the tone of the year-round show somewhere between Australia’s The Footy Show and “elements of” Sky’s sports-themed comedy panel show A League of Their Own, while he also name-checks the “off the cuff” feel of TFI Friday.

The running time will be about 45 minutes, though the beauty (and perhaps the danger) of being online and interactive is that this is a flexible number. “The conversation among sports fans is never paused. People will always want to discuss sport,” says McKenna.

Indeed, between Maximum’s sporting past wins – in the UK it has a weekend preview show called Football Friday Live – and Second Captains’ recent success in building a subscription podcast business, sporty chat is clearly a profitable enterprise. The irony here is that the TV rights to live sporting action are often an expensive loss-leader for broadcasters.

If Maximum can amass viewers SportsJOE Live could mark the beginning of a new wave of online video production in Ireland, and another sign that the traditional television industry won’t have everything its own way in future.

It won’t put a public target on it but the audience is “something that will build over time”, Molony says.

Tools and hardware company Screwfix.ie is the partner for SportsJOE Live in a deal brokered by MEC Wavemaker, while Ladbrokes and AIB have been signed up for its rugby and business podcasts.

Molony doesn’t see it that way. “The rules are still the same – create really good content and you get really good audiences.” And Facebook is “constantly evolving and changing”, she adds. Mid-stream advertising, currently being tested in the US may bring another revenue opportunity in future.

Molony (previously of The Irish Times) and McKenna (ex-RTÉ) are joined on the studio sofas by Maximum’s new chief commercial officer Daragh Byrne, formerly of UTV Ireland and TV3. “People will watch SportsJOE Live the same way they would linear television. The lines are being blurred. There kind of are no lines anymore,” says Byrne.

The JOE Show will be its next Facebook Live proposition, followed by shows created for the two other “channels” within the group, Her and HerFamily, while the next phase for the expanding Maximum – founded by Niall McGarry in 2010 – is to make “white label” video content for brands’ own social channels.

Inside Maximum Studios’s control room, head of production Mick Brennan (also ex-UTV Ireland) explains that its five full HD cameras are 4K-ready, while the show will go out over IP internet, with no need for expensive satellite uplinks.

“Everything is flat-packable to go out on the road,” says Brennan, surveying the bank of monitors. “This is the direction that everyone in the industry wants to go.”