An Post in the red; Lone Star tax blues; advisers cash in on State sale of AIB 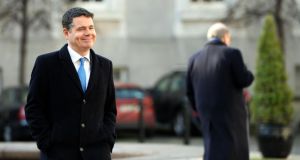 Minister for Public Expenditure & Reform Paschal Donohoe: Government must cut tax or it risks losing jobs to other countries in the wake of Brexit. Photograph: Eric Luke

The Government must cut tax or it risks losing jobs to other countries in the wake of Brexit, according to the Minister for Public Expenditure Paschal Donohoe. Writing in the Sunday Independent, Mr Donohoe says the marginal tax rate needs to be lowered if Ireland is to remain an attractive destination.

The financial crisis at An Post features in most of the Irish Sunday papers. The Sunday Times reports the group will post an overall loss of €15 million for 2016. A letter from the company chief executive to its 1,000 independent postmasters, seen by the Sunday Times, calls for a fundamental restructuring, without going into details about post office closures.

However, the Sunday Independent reports that more than 200 post offices are set to close. It says the plan has yet to go to the board. Meanwhile the Sunday Business Post writes that the company believes it can fulfil its mandate with just 700 post offices, some 435 fewer than currently in operation. However the paper suggests it is unlikely to cut the number of post offices so drastically.

Advisers to the sale of part of the State’s stake in AIB are set to make almost €40 million in fees, according to the Sunday Business Post. The Government is preparing to sell off 25 per cent of AIB, with expectations it will raise €2.85 billion. The paper goes on to report on the scale of bankers’ pay at other institutions. It reports Bank of Ireland paid 190 senior executive €54 million in salaries last year and that Permanent TSB, which is 74 per cent owned by the State, paid 63 executives €12.3 million.

The Sunday Times reports that an upcoming report by the Dáil’s Public Accounts Committee into Nama’s sale of its Northern Ireland property portfolio finds the agency could have secured an additional €190 million. This is in line with findings made last year by the Comptroller and Auditor General. The paper says the PAC report concludes there was an “actual loss” to the exchequer from the sale. The Sunday Business Post, which last month published the draft findings of the PAC report, says the Minister for Finance is to strenuously dispute its conclusions.

American private equity firm Lone Star has claimed the tax changes to Section 110 companies investing in distressed assets will cost its investors more than €90 million. The Sunday Times reports that Phil Gramm, a former US senator who lobbies for the firm described the move as “shocking” and was particularly disturbed that the changes applied to investments already made and not just new ones.