‘When is Ed Sheeran doing that thing?’ and other questions

News sites are making it their business to tackle vital queries like ‘When is Easter?’ 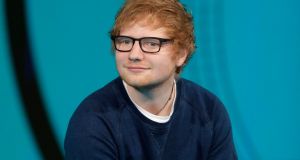 Ed Sheeran, guest-starring in ‘Game of Thrones’ and very possibly looking forward to Easter. Whenever that is. Photograph: Antonio Calanni/AP.

“When you say it’s going to happen now, well, when exactly do you mean?” sang Morrissey, blissfully unaware that the same essential question would one day become a key plank in the search engine optimisation (SEO) strategies of traffic-chasing media companies.

“When” is one of the most important words for publishers on the internet today. So many headlines begin with it, aliens might assume the defining characteristic of the human race in 2017 is a need to anchor ourselves to a constantly updated and weirdly-detailed schedule.

Take for example, “When is Game of Thrones season seven?” and its many cousins. The hey day for articles purporting to answer this commonly Googled question was probably the blind speculation phase, not now the air date (July 19th) has actually been confirmed.

Now the hype cycle has moved on, and there’s barely a click-hungry site or app in the land that didn’t reproduce this week’s “Ed Sheeran to star in Game of Thrones” double-whammy of a story. But some will go one step further. Their next headline will be, “When will Ed Sheeran be in Game of Thrones?”

It won’t matter a jot that nobody will have much more information than “during some brief lull in the seventh season”, probably when the remaining members of the Stark family can spare the time for a Winterfell knees-up (that’s my guess). The point is that enough people will be typing the question into the Google search bar for it to make sense to frame the story this way.

They are not the only ones, but Telegraph Media Group (Telegraph.co.uk) and News UK (through TheSun.co.uk) are notably enthusiastic purveyors of the “when is” genre. I like to imagine both companies operate large content engine rooms in their basements with “Department of When” signs half-nailed to the door. Inside, sunlight-deprived teams of content-uploaders dedicate themselves to the monetisation of anticipation.

More likely, a memo has done the rounds, and with some success. For several weeks last winter, the Telegraph’s “when is” article on the likely debut date of the John Lewis Christmas advertisement was one of its most-read business articles, and never mind that for most of that period, it didn’t have a clue when the ad was going to land.

“When is the FA Cup semi-final draw happening?” was yesterday’s big one. The answer, obvious to anyone who has even half-followed these things over the years, was immediately after the last of the quarter-final ties, the Monday night clash between Chelsea and Manchester United.

But once again this threw up a Russian doll of “when” questions. When would Chelsea be playing Manchester United? The Telegraph was on it, its preferred format for matches always going something like “what time is kick-off, what TV channel is it on and why don’t you fall into our vortex of football-themed content now you’re here?”

The implication is that the concept of an all-in-one-place listings section – whether it be for sport or television or forthcoming events – is passé. The goal of publishing separate “preview” articles for individual sporting fixtures, TV shows, gigs, shindigs and festivals is to deliver a long tail of readers and incremental ad revenues.

And to be fair, sometimes Google alone does not have the answer. Search “When is Eurovision 2017” and it insists that the song contest will begin on Tuesday, May 9th, and will end on Saturday, May 13th. While this is technically true, it does conjure up the vision of a five-day spectacle with no breaks.

Of course, if every media organisation were to join in the “when” game in the same militarised fashion, a law of diminishing returns would start to apply. Not only would media outlets have to share the available clicks – and invest even more precious energy into beating the competition on SEO – but by jumping on the content conveyor belt, they would chip away at their brand identity until not much of distinction is left.

It would be madness to advocate copycatting as a strategy. Still, I’ll make an exception for the “when is” genre gold that is Easter. Every news site should make it their business to publish an article in January with a headline that goes something like “when is Easter in Insert Year Here and why can you never remember what the stupid rule is?”

Then, to differentiate themselves from a mere calendar, they should trot out the usual stuff about full moons and equinoxes and moveable feasts, then follow the Sun’s example by leading on real talk about school holiday dates and later throwing in the observation that it’s getting “egg-stremely close”.

And every once in a while, it will do no harm to remember that people like to have something to look forward to, even if it is just another hopeless semi-final in Kiev on May 11th. Or Ed Sheeran in Game of Thrones.

9 Irish whiskey sales near milestone of 12m cases a year