Requirement to include terms and conditions is costing the medium money, says MEP 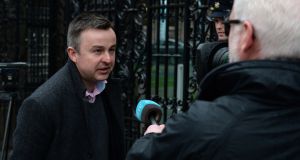 Fine Gael MEP Brian Hayes has called on the European Commission to revise radio advertising rules that require lengthy terms and conditions to be included in ads for financial products involving consumer credit.

The information, usually delivered at a fast pace at the end of ads, could be replaced by a simple message directing listeners to a website for further details, Mr Hayes said.

“Irish radio stations are losing revenue from this Brussels red tape requirement,” said Mr Hayes. “Radio advertising is severely disadvantaged as it does not have the visual element enjoyed by other media sources such as print, web and television.”

The requirement, which falls under the Consumer Credit Directive, is much lamented by the radio industry. It can mean that when a company buys 40 seconds of radio advertising, it may have to fill up to half that time rattling off the terms and conditions. The ads have also been criticised as a turn-off for listeners.

“I believe the European Commission needs to revise the rules,” Mr Hayes said.