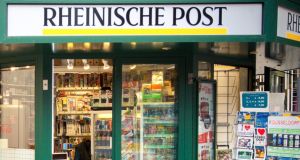 The Bundestag voted on July 2nd to back the funding – but media organisations are still unsure whether to accept the money. Photograph: iStock

Germany’s print media organisations cannot decide whether it is an indecent proposal or an offer they can’t refuse.

As the Covid-19 pandemic aggravates their long-running existential crisis, Germany’s news and magazine publishers have been offered €220 million to manage their “digital transition”. Making the offer: Germany’s federal government. The Merkel administration insists the money is a gift, with no strings attached, and have already earmarked the money in this year’s budget. So will the media take the money? That depends on who you ask.

Germany’s BDZV, a lobby group for newspaper and magazine publishers, has welcomed the government’s recognition of the challenge its members face in challenging times.

“We don’t know the details yet,” said Dietmar Wolff, head of the BDZV. “What’s important is a further strengthening of the publishers’ infrastructure without touching their editorial independence.”

And that is the €220 million question. The left-wing alternative Taz newspaper, which has spent most of its 42-year existence perched on the brink of financial ruin, has called out the funding as “dirty money from the state”.

“It’s a step into the unknown,” it warned. “It raises the question of what it will do to the press as a democratic instance, where the strict separation of free press and state is non-negotiable.”

The €220 million fund, spread over five years, is the second offer from the federal government, following its original €40 million, one-year offer.

The Bundestag voted on July 2nd to back the funding – but media organisations are still unsure whether to accept the money.

The BDZV appears inclined to recommend members accept. While German newsstands suggest a remarkably intact level of newspaper and magazine titles and diversity, a recent BDZV study predicts that the clock is ticking on analogue products. It forecasts a 40 per cent drop in the delivery of paper newspapers and magazines by 2025, because it no longer makes economic sense to do so.

While media organisations mull over the offer, the far-right Alternative für Deutschland (AfD) has launched a campaign against it.

“Publishing companies that accept taxpayer millions from the government will never be believed again,” said Joachim Paul, a leading AfD Bundestag member. “The media are already accused of court-reporting of the government.”

Public funding of private print media, a long tradition in some European countries, has spread across the continent in the last decade in parallel with a growing existential threat to the industry.

Sweden has had public subsidies of newspapers since 1969, currently paid out to 140 publications to cover distribution and publication technology. France budgeted €580 million for print media in 2017 while Austria’s government transfers €178 million in public money annually to the country’s leading newspapers.

Back in Germany, some media analysts have suggested the proposed subsidy for private print media companies may be counterproductive.

Dr Christopher Buschow, a media professor at the University of Weimar, told the Taz such subsidies “put publication houses on a drip and create no incentive for them to change”.