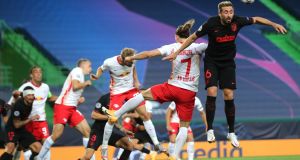 Virgin Media Ireland withdrew its sports channels from Eir on Thursday, ahead of the UEFA Champions League quarter final between Atletico Madrid and Leipzig. Photograph: Miguel A. Lopes/AFP

The day after Virgin Media pulled its sports channels from Eir after the latter refused to make a scheduled contract payment in full, neither side was able to say when, or if, the dispute would be resolved.

“We think we have been very reasonable and our door is wide open to turn the supply back on once Eir pays its bill,” said Virgin Media Television managing director Paul Farrell.

However, Eir reiterated that it will not stick to the original payment terms because the content it expected to feature on Virgin Media Sport was postponed and later curtailed as a result of the Covid-19 pandemic.

The redesign of the UEFA Champions League and Europa League tournaments, rescheduled to this month, has meant fixtures that would previously have taken place over two legs were cut to single-leg clashes.

The August timing is also thought to be less favourable for attracting audiences, although this has been offset by pent-up demand from viewers after months of sporting drought.

While Virgin Media expects to receive some compensation from UEFA on its rights deal that it has signalled it could pass on to Eir in the form of a payment rebate, the figure is not set to be negotiated with UEFA until after the conclusion of the tournaments when the impact of the changed schedule can be assessed.

Virgin’s row with Eir erupted publicly on Thursday evening when it announced it had “suspended” its supply of the channels to Eir because the company had “failed to pay the contracted distribution licence fee”.

The plug was pulled shortly before the Champions League quarter final between Leipzig and Atletico Madrid. While RTÉ also has the rights to some of the matches, this was not one of them, meaning Eir customers with no alternative pay-TV service found they no longer had access to the fixture.

Eir responded that it could “only pay for the sports events that actually take place”. It said it had “consistently offered fair terms” to reflect the reduced timetable, but that Virgin Media had not agreed to them and instead “taken the unreasonable step of unilaterally withholding their feed” from Eir customers.

Eir, which has the rights to Leinster versus Munster in the restart of Guinness Pro14 rugby next weekend, has not to date withdrawn Eir Sport from Virgin Media.

It told customers it was “working towards a swift resolution to this issue”.

Virgin Media and Eir agreed in August 2019 to supply their respective sports channels to each other’s services. Eir makes the Virgin channels free to access to its broadband customer base, which stood at 947,000 at the end of June, and markets its broadband on the basis that it includes Virgin Media Sport.

As the rights held by Virgin Media – including Champions League and Europa League soccer – are deemed to be more valuable than Eir’s, the deal involves Eir making a net payment to Virgin.

The instalments on the two-year contract were to be spread over three years, with only a small portion paid at the outset of the deal in 2019. Notice of the second payment was issued in June, but was not received before it fell due at the end of July.

It is understood Eir then informed Virgin Media that it was willing to pay only 40 per cent of the owed payment, implying it was seeking a discount of 60 per cent.

Virgin Media expects the compensation it eventually receives from UEFA will be significantly more modest. In the meantime, it is due to make a further rights payment to the European football body in respect of the 2020-2021 season.

The contract with Eir is believed to contain no force majeure clause in relation to events that do not take place, while Virgin has not yet raised the matter of Eir Sport’s cancelled rugby and GAA coverage.

One disgruntled Eir customer who suggested to Eir’s customer service Twitter account that the terms of his own contract had been broken was told that Virgin Media Sport was “a free add-on to the service, subject to change and is no reflection on the bundles you pay for per month”.

The blow-up marks the end of a one-year ceasefire between the rival companies after a previous three-year dispute. Virgin Media controversially dropped Eir Sport in a pricing dispute in 2016, meaning its subscribers could no longer sign up to pay extra for the package through the Virgin platform.

Oil price slump weighs on global markets 18:16
Enegy giant EDF buys Wexford Solar 17:47
Not just another brick in the wall 17:41
Only half the homes needed this year will be built, construction event told 17:35
Draper Esprit to raise £100m through share placing 17:30
Search executive
jobs on irishtimes.com