F1 revenues almost wiped out by pandemic halt to races 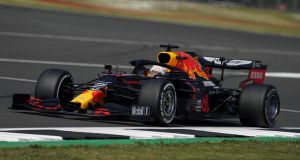 Formula One’s revenues were almost entirely wiped out in the second quarter of the year, as the elite car racing series struggled with the delay to the start of its world championship amid the coronavirus outbreak.

The results underline the scale of the task facing Liberty Media, the US group controlled by billionaire John Malone, which acquired F1 in an $8 billion (€6.8 billion) deal in 2016. It is looking to stage between 15 and 18 races in order to rescue as much revenue as possible.

Neither broadcasting revenues nor the fees paid by race promoters for the right to stage grands prix were recognised in the quarter. At least 15 races are required this season to satisfy broadcasting contracts, according to people briefed on the deals.

The Paddock Club corporate hospitality business, which relies on fans being able to attend races and charges thousands of dollars per ticket, was also hit, though F1 said it was weighing up plans to allow a limited number of spectators to return this year.

Second-quarter operating losses amounted to $122 million, swinging from an operating profit of $26 million, and there was no repeat of the $335 million payment made to teams for the period last year because of the lack of races.

F1 furloughed roughly half of its 500-strong workforce through the UK government’s support scheme, though most staff returned ahead of the season restart.

The F1 season, which was due to begin in March, got under way in Austria on July 3rd. The dominant Mercedes team is leading the standings after five races, with reigning champion Lewis Hamilton still leading the individual rankings despite finishing second to Red Bull’s Max Verstappen at F1’s 70th anniversary Grand Prix at Silverstone over the weekend.

Liberty Media implemented measures to protect F1’s business in the face of the lockdown, injecting $1.4 billion of cash through an asset swap and amending the terms of a $2.9 billion loan and $500 million revolving credit facility to give it flexibility around its agreements with lenders.

The virus has also hit individual F1 teams and their owners. Williams is undertaking a strategic review, McLaren has raised fresh capital from investors, and the French carmaker Renault fell to a record €7.3 billion loss in the first half of this year.

Chase Carey, chairman and chief executive of F1, told analysts on a call that the racing series was planning to return to a 22-race format in 2021. However, he cautioned that “we don’t have any better visibility than anybody else what this virus is going to look like as we go forward”.

“We were very much moving to deliver the type of long-term growth that we had talked about,” he said. “Obviously, the virus turned it all on its head. At this point we’re planning on a 2021 that is probably not quite, but pretty close to, the 2021 we would have planned.”