Associated Newspapers (Ireland) spent €3.25m on redundancies during the year 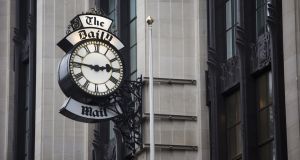 The directors attributed the company’s profitability growth to a cost restructuring in addition to the increase in turnover. Photograph: Getty

The owner of the Irish Daily Mail and evoke.ie increased profit before tax by 90 per cent to €2.2 million, recently filed accounts show, after it grew turnover and implemented redundancies across its Irish business.

Associated Newspapers (Ireland) Limited improved its turnover by 24 per cent to €20 million in the 12-month period to September 29th, 2019, the company’s most recent financial period. Redundancy costs during the year amounted to €3.25 million.

The group provides editorial, sales and administrative service for the Irish editions of the Mail on Sunday, the Daily Mail, the Mail Online, evoke.ie and extra.ie. It is a wholly owned subsidiary of Daily Mail and General Trust PLC, which is ultimately owned by media baron Viscount Rothermere. The Irish titles are run by its news division, DMG Media.

The directors attributed the company’s profitability growth to a cost restructuring in addition to the increase in turnover.

“The risks and uncertainties faced by the business are those typical of the newspaper publication sector. Influences include the level of competitor investment and further decline of print media in favour of digital,” the directors said.

They added that the business has not been “severely affected” by the Covid-19 crisis, thanks to the group’s “varied and diverse revenue streams”.

“The directors have taken measures to mitigate the impact of Covid-19 to ensure that the company is in a good position to get through the pandemic and to be in a position of strength for the opportunities ahead”.

Employee numbers at the newspaper company fell from 147 to 135 within the period while wages and salary costs fell from €9.85 million to €9.38 million.

During the financial year, the company acquired rollercoaster.ie. In July, the group announced it had acquired wedding website onefabday.com.

The company did not pay a dividend to its ultimate owner during the financial year.

1 Sean Quinn stunned at rebranding of Quinn Industrial Holdings
2 Probate is changing: What does that mean for you?
3 Three Ireland switches on 5G network around the country
4 Irish golf tourism faces ‘wipeout’ unless Covid travel restrictions eased
5 SR Technics sells design engineering business to Growing Aero
6 Am I paying too much for my buy-to-let mortgage?
7 Irishwoman Adrienne Gormley joins N26 as chief operating officer
8 U2 face closure of loophole they used to avoid paying their taxes
9 Should I switch bank now with Ulster Bank at risk of closing?
10 D’Arcy appointment will not blow over
Real news has value SUBSCRIBE

Will tracker mortgage be at risk if Ulster Bank closes? 05:56
Stocktake: Investors should not trust cheating CEOs 05:50
Probate is changing: What does that mean for you? 05:42
Stocktake: Correction time for stock markets 05:40
Irish golf tourism faces ‘wipeout’ unless Covid travel restrictions eased 05:19
Search executive
jobs on irishtimes.com