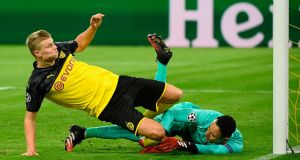 The return of Champions League and Europa League is bringing advertisers back to Virgin Media. Photograph: Ina Fassbender/AFP via Getty Images

Virgin Media Television is toasting the return of live sport with a month of Champions League and Europa League action kicking off this week. But the advertisers drawn to its “festival of football” won’t offset the Covid-19 revenue plunge at the broadcaster.

Paul Farrell, who succeeded Pat Kiely as managing director earlier this year, said he expected advertising revenues at the former TV3 Group to be down 23-25 per cent for 2020.

“In April, advertising fell off a cliff,” Mr Farrell said. “We have seen a small percentage uplift in June and July, and the football has also given us a bump.”

But while radio revenues have been lifted by Government campaigns on Covid-19, “television is coming back a lot more slowly”, in part because advertisers have faced production hurdles when filming new ads.

The loss of key programming such as ITV reality series Love Island, which last year attracted more than 12 million on-demand streams for Virgin Media, has also hurt, especially as Virgin receives no compensation for the cancellation. This is because Virgin’s contract with distributor ITV Studios is an output deal covering a fixed number of hours rather than being tied to the delivery of particular shows.

If the Australia-based I’m a Celebrity, Get Me Out of Here! goes ahead in the winter, as ITV chief executive Kevin Lygo indicated it would on Friday, it will deliver a viewer and advertising boost in the all-important run-in to Christmas, Mr Farrell said.

“A lot of our revenue does come in the last four to five months.”

ITV has also announced that soaps Coronation Street and Emmerdale, which Virgin broadcasts as part of its output deal, will return to a full production schedule of six episodes a week from September.

Virgin’s own commission, Gogglebox Ireland, is expected to start preparing for its next series. The format of the show, made by Kite Entertainment, lends itself to socially-distanced filming, Mr Farrell said.

Meanwhile, a Virgin Media/Channel 5 drama co-starring Normal People’s Emmy-nominated Paul Mescal – a four-part thriller called The Deceived by Derry Girls creator Lisa McGee – is “fortuitously in the can”. (It is airing on the UK’s Channel 5 this week.)

The Virgin Media Television boss also signalled “a big focus on new partnerships” and the production of more content designed for online consumption, rather than primarily through its linear television channels. This will include its first push into podcasts.

“There is no reason why we can’t create good audio,” he said.

Mr Farrell, who was previously vice-president of commercial at parent company Virgin Media Ireland, welcomed the additional €2 million recently allocated by the Government to the Broadcasting Authority of Ireland’s Sound & Vision scheme.

He said he had been “a bit unhappy” with the process that saw the scheme depleted below its normal levels as a result of direct Covid-19 supports for radio stations. This funding decision, approved by former minister for communications Richard Bruton, led to a period of uncertainty for independent television and radio producers up until the July 24th stimulus announcement by new Minister for Media Catherine Martin.

Mr Farrell is now anticipating a wider debate on public media funding as part of the Future of Media Commission, saying he hoped this would go beyond “the old conversation about what RTÉ gets”.