Ardmore Studios changing hands but details not part of storyline 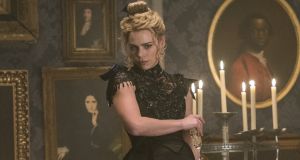 Billie Piper as Lily in Penny Dreadful: The Tudors and Penny Dreadful, plus a steady stream of feature films, have been made in Ardmore Studios, Co Wicklow. Photograph: Jonathan Hession

Ireland’s most storied film studios is changing hands. And, as with many a blockbuster movie or TV series, much is being kept under wraps.

Ardmore in Bray has been owned by showbiz accountant Ossie Kilkenny and former U2 manager Paul McGuinness for the past 30 years. Enterprise Ireland has also held a significant stake in the business.

It has seen some lean times since it was first opened in 1958, most recently during the financial crash when the burden of debt almost closed it down in 2012.

However, it has returned to profit since, helped by tax relief for investment in Irish-produced film projects and the winning of work on several high profile projects, including The Tudors, Penny Dreadful and Dancing with the Stars, and a steady stream of feature films.

When it was put on the market, the expectation was that Ardmore could command a price of between €15 and €20 million. It had reported profits of €1.35 million for each of the previous two years. In this relatively upbeat scenario, a strong sale, possibly to an international industry player looking to capitalise on growing opportunities in Ireland, might have been expected. It never happened.

Now, almost 18 months after it went on the market, a buyer has appeared – Joe Devine’s Olcott Entertainment.

And beyond the fact that Devine is also involved in Ardmore’s “sister” studio – Troy, based on the former Dell site in Limerick – as an investor and chairman of its board, and is a founder of private equity group Ion Equity, all is a mystery.

Olcott was formed only in February. There is no information on who, alongside Devine, is investing and no details of how much the deal is worth.

The suspicion, not least because of its age and the lack of international interest, is that fairly substantial investment may yet be required. It will be up to Devine and whatever team is working with him to fill in these notable gaps in the storyline before the future for Ardmore becomes clear.