Who’ll blink first as Trump and Xi steel themselves for trade war? 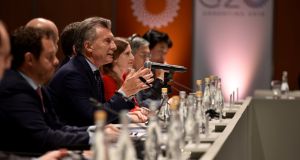 America’s aggressive announcements on trade dominated the agenda at the G20 financial summit, with US treasury secretary Steve Mnuchin saying the US was ‘not afraid’ of a trade war. Photograph: Reuters

There was one thing on the minds of policymakers at the G20 financial summit, which finished in Buenos Aires on Wednesday. America’s aggressive announcements on trade earlier this month dominated the agenda as finance ministers and central bankers from across the globe made their feelings known to US treasury secretary Steve Mnuchin. The former Goldman Sachs banker seemed unmoved. The US was “not afraid” of a trade war, he said in his closing speech.

Just as well, it seems. There are reports that China is preparing to announce tariffs on key American exports in retaliation for Washington’s aggressive stance on steel and aluminium imports.

Those tariffs are due to take effect on Friday; in addition, the White House is expected to announce fresh tariffs on up to $30 billion in imports from China as early as Thursday.

In response, Beijing is preparing measures that would hit US agricultural exports, impacting many of the states that voted so heavily for Trump in 2016.

Among the products expected to be targeted are soybeans, sorghum – a corn-like grain – and live pigs.

The impact of a tax on soybeans alone would have huge implications for US producers. China buys about a third of US soybeans. America’s trade deficit with China rose to $375 billion last year, a figure that has infuriated Mr Trump and some of his more protectionist advisors such as Peter Navarro and Wilbur Ross, whose currency has risen with the imminent departure of Gary Cohn. Despite the surprise display of bonhomie last year when the US president welcomed Xi Jinping to his Mar-a-Lago estate, relations between the world’s largest economic powers have become strained.

With China needing US buyers for its goods more than the other way round, perhaps the Chinese need to take a leaf out of the Saudis’ book. This week Mr Trump lauded crown prince Mohammad bin Salman at the White House .

“Saudi Arabia is a very wealthy nation, and they’re going to give the United States some of that wealth, hopefully,” he said, noting Riyadh’s purchase of US military equipment. Mr Xi and his comrades may find that a few strategic announcements about the two-way nature of China-US trade may be the best way to keep its biggest customer on board.