Pinsent Masons finds what it’s looking for at Windmill Lane 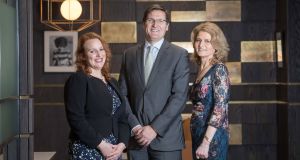 From left, Ann Henry, Richard Foley, both from Pinsent Masons, with Mary Buckley, executive director of the IDA, at the opening of the Pinsent Masons Dublin office at Windmill Lane. Photograph: Mark Harrison

“You’d be nuts to disavow a whole class of talent,” says Richard Foley, chairman of the board and senior partner with Pinsent Masons, a global law firm that has just opened an office in Dublin.

He’s talking about diversity and inclusivity and how they have contributed to the rapid growth of Pinsent Masons in recent years.

He says he is “passionate” about the topic and he certainly comes across as such over lunch at the firm’s spanking new offices at Dublin’s Windmill Lane where, back in the day, bands such as U2 and the Waterboys recorded some great music.

Pinsent was an early mover on introducing programmes to ensure that members of the lesbian, gay, bisexual and transvestite (LGBT) community found the firm a comfortable place in which to work, and is now regularly voted a top UK employer in that regard.

Likewise the firm is very much focused, Foley says, on gender, ethnic and social mobility, equality and diversity. Five years ago, at a time when the gender split of all staff was about 50-50, but only 17 per cent of the partners were women, the firm decided it had to focus on gender diversity.

The percentage of partners who are women has now risen to 25 per cent, which is a considerable change in a firm with 430 partners.

The change has come about by directly addressing the issue, he says, “without giving anyone an unfair advantage”.

If a firm is going to go down this road, it must take the challenge seriously and not just as a PR strategy. He mentions refusing to go on panel discussions in Asia if there are no women involved.

Pursuing diversity and fighting prejudice is the right thing to do but also reaps business rewards.

“If you can create a genuine reputation in the market then you attract talent and clients that other businesses don’t.”

The firm, he says, has a long way to go in terms of ethnic diversity and social mobility, but has come a long way in the “LGBT space” since taking on the project.

The correctness and the advantages of pursuing the diversity and inclusivity agenda is one of the topics he seems particular keen on.

A second is technology and how it changes the way a law firm should go about servicing its clients. Pinsent Masons has developed its own inhouse technology for dealing with the enormous amount of data that almost all modern commercial deals entail.

“Every transaction is data rich these days,” Foley says.

The point is to use technology to handle the data so as to free up more time for the type of advice that gives real value to clients who come to the firm for help.

One instance of using technology to process data efficiently in aid of a client has been the case of Everton FC. Pinsent has used technology to help the club process player transfer issues within the sometimes tight transfer windows that had, in the past, scuppered some proposed deals.

Using technology to help deliver a service to clients frees up time to focus on strategy issues, “but the whole process needs to be legally led”, says Foley.

Pinsent arrives in the Dublin market with an initial ambition to target the funds and financial services industries generally, as well as the technology sector.

While dealing with clients in these areas over the past number of years, Dublin just “kept coming up” and so was identified as a “gap site”.

The decision to open a Dublin office was taken in April 2016, before the UK voted in June of that year to leave the EU, but the referendum vote added to the view that it was “a smart move”.

Foley doesn’t expect the departure of the UK from the EU to cause “droves of firms” to come to Dublin.

“What might happen is that firms and businesses will be more likely to turn the investment dial up here rather than in London. The UK remains the world’s second-largest legal market.”

The Dublin office has 20 staff now, of which 14 are solicitors. The office is “keen to ramp up quickly to achieve critical mass”, says Andreas Carney, one of the three founding partners.

He moved to Pinsent from Matheson. Partner colleagues Dennis Agnew and Gayle Bowen came, respectively, from Byrne Wallace and Walkers.

Getting good experienced solicitors to come to your firm obviously increases the chances of attracting lucrative clients.

Carney says he was, in part, encouraged to make the move to Pinsent because of its attitude towards the use of technology. His areas of specialisation include technology law and data protection, with the latter, he says, being a “C-suite issue” over the past number of years.

Given that we meet in the week that Facebook is so prominently in the news, it comes across as a potentially very interesting area of practice.

With its headquarters in London, Pinsent has more than 3,100 employees and 24 offices around the globe. The firm has no office in the Americas, but does have one in the Falklands.

The global reach of the firm is one of the key resources that is available to the Dublin office, Carney says.

Foley says the board sometimes uses the services of a military strategist to help it with scenario planning, and appears to have a low opinion of organisations that don’t make plans for changes that might or might not happen, but will have serious consequences if they do.