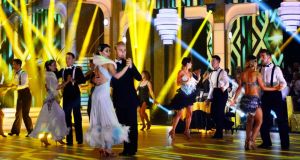 Dancing with the Stars: filming at Ardmore of the 2017 series of the RTÉ show. Photograph: Cyril Byrne

Ardmore Studios has been acquired by a group headed by the chairman of its rival Troy Studios, Joe Devine.

Ardmore, in Bray, Co Wicklow, was put on the market by its majority owners, the businessmen Ossie Kilkenny and Paul McGuinness, in October 2016. Enterprise Ireland, the government agency, has also sold its 32 per cent interest in the business, which is among the largest studios in Ireland.

Mr Devine, who is also an investor in Troy’s Limerick operation, has bought the studios through a company, Olcott Entertainment, that was incorporated only last month, specifically to execute this deal.

No price was given. Olcott also provided no details of its backers, beyond Mr Devine, or how it is financing the transaction. Industry sources valued Admore at between €15 million and €20 million when the sale was first mooted. Siún Ní Raghallaigh, the chief executive of both Ardmore and Troy, will continue in that role, according to Olcott.

Ardmore, which opened in 1958, and has seven international-standard sound stages, has been involved in Braveheart, My Left Foot and Excalibur, among other films. More recently, television series such as The Tudors, Moone Boy and Penny Dreadful have also been filmed there. Its current productions include the US series Into the Badlands, RTÉ’s Dancing with the Stars and two feature films, The Rhythm Section and The Turning.

Mr Devine, who is a founder of the Ion Equity finance firm, said on Friday that he was delighted to have concluded the acquisition. “Our interest in the sector is against a backdrop of significant global demand for content and thus for production facilities,” he said. “The drive for more content is fuelled by big-screen film, increasingly on-demand TV, and the gaming industry.”

Ireland’s film-investment incentive scheme made Ardmore an attractive asset, he said. “We have ambitious plans for the business and believe this heralds a new era for these historic studios.”

Enterprise Ireland welcomed the acquisition, saying the deal had the potential to breathe new life into the company “at a time when the market for film production in Ireland is again showing strong growth potential”. But it noted that “continued investment is required in the studio’s facilities to secure its long-term commercial future”.

The Wicklow Fianna Fáil TD Pat Casey accused the Government of breaking a commitment to consult local public representatives ahead of any sale of the Enterprise Ireland stake. There had been some local protests amid concerns that the site might be sold to a property developer.

German chancellor’s return, Trump’s new press secretary and fashion gloom 05:55
Covid-19 will limit next government’s ability to tackle housing and climate change 05:34
Coronavirus: How the Covid-19 crisis may reshape air travel 05:31
‘In Austin, there just seems to be something for everyone here’ 05:05
Timeless tips and fresh perspectives for uncertain times 05:00
Search executive
jobs on irishtimes.com