European stocks jump most since US election as Dow crosses 21,000 mark for first time 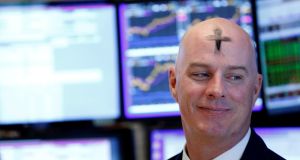 A trader with ash on his forehead for Ash Wednesday works on the floor of the New York Stock Exchange where banks and industrial stocks were the biggest gainers. Photograph: Brendan McDermid/Reuters

The Dow Jones index yesterday soared through the 21,000 mark for the first time after US President Donald Trump’s measured tone in his first speech to Congress lifted optimism and investors viewed a looming interest rate hike as a glass half full.

European stocks jumped the most since the US election, led by banks and miners, as growing expectations of a US Federal Reserve rate increase and robust China factory data boosted optimism about global growth.

The Iseq surged by more than 2.4 per cent, fuelled by a 4.5 per cent jump in its biggest stock, CRH. The building materials giant posted growth in earnings of more than 40 per cent, following the integration of major acquisitions.

Kingspan, which also has major US operations, rose 2.4 per cent.

Bank of Ireland rose more than 4 per cent, on the back of the US interest rate hopes driving banks across the globe.

The FTSE 100 index closed up 1.6 per cent, its highest level ever, taking gains to more than 27 per cent since a Brexit vote sell-off in June last year.

Miners helped the index as copper climbed to its highest level in nearly a week on concerns about a shortage of supply and an upturn in manufacturing growth in top metals user China.

The UK mining index rose 3.5 per cent, supported by share price rises of between 3.1 and 4.9 per cent for BHP Billiton, Glencore, Anglo American and Rio Tinto.

Gold miners, however, lost out following a rise in the dollar on the US rate hike expectations.

Broadcaster ITV surged 9.2p to 211.7p as pretax profits held up despite a Brexit-induced drop in full-year advertising revenues.

Royal Mail was the biggest faller on the London market, dropping 7.6p to 407p, after Ofcom said it would not make sweeping changes to the way it operates, but would retain its 2012 framework until 2022.

France’s CAC hit a 15-month high while Germany’s DAX surged to a 22-month high, both gaining around 2 per cent.

The gains in CRH helped Europe’s construction index rise 2.1 per cent to its highest since August 2007.

Europe’s defence sector index climbed to a 19-month high, with Rheinmetall among the top gainers, up 5.1 per cent, after the German military technology group reported better than expected results.

Europe’s mining index was up 2.9 per cent as copper prices rose.

The three main stock indexes surged more than 1.3 per cent to close at record highs.

The S&P financial index soared 2.84 per cent, outperforming the other 10 major sectors.

About 8.1 billion shares changed hands on US exchanges, the most in 2017 and well above the 6.9 billion daily average for the past 20 trading days, according to Thomson Reuters data.

All eyes today will be on the trading debut of Snap Inc, owner of popular messaging app Snapchat. Despite having never turned a profit, it yesterday raised $3.4 billion in an initial public offering, giving it a valuation of $24 billion.