Investors bet rise in US interest rate could come this month 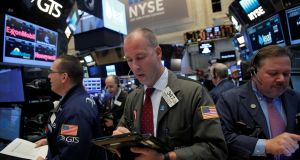 Irish shares jumped 2.4 per cent on Wednesday to a 14-month high as investors globally moved out of bonds and into equities on bets that a US interest rate hike could come this March.

The Iseq index’s rise to 6,705.05 points was also driven by a strong set of full-year results from index heavyweight CRH and US president Donald Trump’s commitment in a speech on Tuesday evening (US time) to his $1 trillion infrastructure spending plan.

However, the wider markets took their cue from the president of the New York Federal Reserve, William Dudley, saying late on Tuesday that the case for raising interest rates had become “a lot more compelling”.

The Dow Jones Industrial Average in New York had gained 1.4 per cent to breach the 21,100-point level for the first time after European markets closed.

The Federal Reserve has only twice hiked interest rates since the onset of the financial crisis, in December 2015 and December 2016.

Financial market analysts said that investor sentiment was underpinned, but not driven, by Mr Trump using his first address to Congress to move from his recent rhetoric of carnage and conflict to strike a softer tone – even if he provided few new details on policy.

Analysts at Citi said: “The general bipartisan tone of the event and the optimistic and cohesive nature of his comments has been cited [as] a positive.”

Meanwhile, the prospect of the European Central Bank easing back on its quantitative easing (QE) bond-buying programme may be drawing near after initial data from several German states suggested the country’s inflation rate rose by more than 2 per cent last month. The ECB targets inflation of just under 2 per cent across the euro zone.

9 Thinking time: Why it should be essential in every workplace