European stocks edge higher and US waits for news 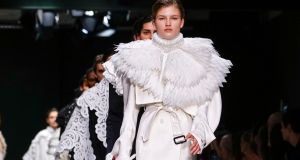 European stocks closed higher, snapping a four-day decline, as gains in travel and construction companies offset losses in miners. The pan-European Stoxx 600 Index rose 0.2 per cent at the close. The benchmark trimmed intraday declines on Monday as construction companies rallied on US president Donald Trump’s comments about “big” spending on infrastructure. Investors are seeking details of his economic plans from his address to a joint session of Congress, which was due to start at 9pm local time.

The Iseq index closed 0.3 per cent higher at 6,546.57, even though index heavyweight CRH was out of sorts. CRH, which has been the victim of volatile trading in recent sessions amid speculation over Mr Trump’s infrastructure plans, closed down 0.9 per cent at €31.87. Sentiment toward the stock was also subdued as investors positioned themselves ahead of the building materials group’s 2016 results on Wednesday.

However, Ryanair was in demand, rising 2.4 per cent to €14.30, along with real estate investment trusts. Dalata gained 0.2 per cent to €4.40 after the hotel group said its operating earnings rose 36 per cent last year, to €85.1 million, with analysts at Davy saying the result was 3 per cent ahead of what they were forecasting.

Insurer FBD lost 1.9 per cent to €7.85 as investors concluded that the stock, which has risen sharply so far this year, may have gotten ahead of itself, even though the group on Monday reported that it had returned to profit last year.

Banks had a choppy session. Bank of Ireland and Permanent TSB each rose by at least 1.9 per cent during trading, after the Banking and Payments Federation Ireland released data showing that mortgage approvals across the industry rose almost 60 per cent in January. However, both dropped into negative territory to close lower.

The FTSE 100 index closed 0.1 per cent higher at 7,263, with fashion house Burberry among the top gainers. Burberry rose 3.7 per cent after an activist Belgian investor Groupe Bruxelles Lambert disclosed a 3 per cent stake in the luxury goods group, prompting speculation it may push the group to increase cost discipline.

Engineering group GKN rose 4.9 per cent after it had reported a 12 per cent rise in profit for 2016, and sales up 22 per cent, ahead of forecasts.

Babcock International, the engineering support and outsourcing company whose biggest client is Britain’s ministry of defence, was the top FTSE gainer, up 7.1 per cent, after saying it remained on track to achieve its full-year targets.

European shares have rallied more than 10 per cent since Mr Trump was elected. However, the broader market ended Tuesday’s session just 0.2 per cent higher as investors awaited the US president’s keenly-awaited first speech to Congress.

European basic resources index fell 1.1 per cent, the biggest sectoral decliner in Europe. It was dragged lower by losses in mining heavyweights BHP Billiton, Rio Tinto and Glencore even though these stocks recovered from their lows as metal prices turned higher, lifted by ongoing strikes in Canada and Chile.

Precious metal miner Fresnillo ended flat, outperforming the sector after reporting a more than six-fold jump in its profit for the year on higher output and a weak Mexican peso.

US stocks were trading lower on Tuesday afternoon, setting up the Dow to snap a 12-day winning streak, as financial and consumer discretionary stocks weighed and investors awaited Mr Trump’s address.

Target slumped 12.2 per cent and was on track for its worst day since December 2008, after the retailer’s full-year profit forecast missed estimates and the company said it would take a $1 billion hit to its operating profit.

Charles Schwab was the top drag on the financial sector after the company said it would cut its exchange-traded fund trade and online equity fees, following similar cuts by Fidelity Investments.