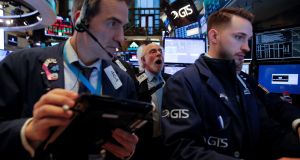 Traders work on the floor at the New York Stock Exchange on Thursday. Photograph: Reuters

Volumes were wafer-thin on the Iseq, as traders and investors mostly stayed at home to watch box sets and eat turkey curry. Just €150 million worth of shares changed hands, about a third of normal volumes.

Exploration company Providence Resources was the standout performer in Dublin, rising in value by about a third after it confirmed it was in talks to farm down its Barryroe oil prospect to an investor, which could help it fund drilling.

Independent News & Media fell by more than 3 per cent, days after it was revealed regulators are questioning its chairman over a “potential data breach”, while the National Union of Journalists has expressed fears over the protection of journalists’ sources.

Irish Ferries operator the Irish Continental Group, rose 2.7 per cent on the day it was confirmed that 2017 was a record year for tourism.

A rally in commodity prices continued to support the resources-heavy Ftse 100 index, which ended flat. Europe’s basic resources index was the best-performing sector, up 0.4 per cent at its highest level in nearly 5 years.

Shares in Anglo American, Antofagasta, Glencore and BHP Billiton all rose 0.6-0.9 per cent, thanks to the underlying copper price hitting a fresh four-year high.

Tech stocks extended the previous session’s losses, when chipmakers were hit by concerns over demand for Apple’s iPhone X. Shares in Dialog Semiconductor rebounded on Thursday, however.

The tech sector fell 0.8 per cent on the day, but has gained more than 19 per cent so far this year, the standout performer in Europe.

Shares in BT fell 2.5 per cent after the telecoms stock traded ex-dividend.

A rise in sterling weighed on big, international stocks such as British American Tobacco and Unilever, which declined 1 per cent and 0.3 per cent respectively.

In Thursday’s trading, Italian bank Banco BPM rose 2 per cent after saying it had capital in excess of requirements set by the European Central Bank.

Volatile retailer Steinhoff, which owns Dealz and Poundland, was among the top gainers, up 3 per cent.

Belgian-serviced office provider IWG fell 1.3 per cent. The stock rose 27 per cent in the previous session, when it confirmed a bid approach from a Canadian private equity firm.

Nearing the year-end, European stocks have enjoyed a positive year, with the Stoxx 600 up about 8 per cent in 2017 as buoyant company earnings and a brighter economic backdrop have fuelled the region’s equities.

Germany’s Dax and Italy’s Benchmark are among this year’s winners, up 13.1 per cent and 15.4 per cent respectively, while Britain’s Ftse has managed to gain 6.7 per cent.

The dollar appeared to ignore signs that the new year could bring higher rates and stronger growth in the US, the world’s largest economy. The dollar index, which tracks the greenback against a basket of major world currencies, fell 0.42 per cent and was at four-week lows.

A mere 0.4 per cent rise in Apple led the three indexes higher, an indication of the muted trading activity in the week ahead of the New Year holiday.

Seven of the 11 major S&P sectors were higher, with the technology index’s 0.31 per cent rise topping the list.