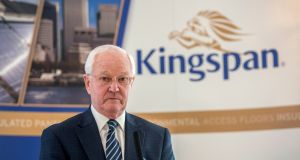 Kingspan has emerged as the top gainer on in the Iseq 20 index in 2017, gaining almost 43 per cent as the insulation group continued to shrug off concerns over Brexit and strike at least €620 million of acquisition deals internationally.

While the Cavan-based company initially plunged as UK voters decided in June 2016 to quit the European Union, the stock had recovered the ground lost by the end of the year – before scaling new heights in 2017. It traded as high as €37 on Thursday, matching a record high reached in October, valuing the company at €6.63 billion.

As of the second-last day of trading of the year, Dalata Hotel Group, one of the market’s laggards in 2016, was the second-best performer among large-cap stocks in Dublin in 2017, gaining 41 per cent, as the company continued to benefit from rising room rates in Dublin and its development plans.

Dalata, which has a portfolio of 7,600 rooms across 38 hotels, said last week that its revenue per available room in Dublin had risen 9.5 per cent in the first 11 months of the year, as it continued to work on a development pipeline of more than 1,840 rooms across Ireland and the UK.

Kerry Group is on track to claim third spot on the winners’ list, having surged nearly 38 per cent so far this year, as its Asia Pacific business continued to power ahead under new group chief executive, Edmond Scanlon, who succeeded Stan McCarthy in September. Business volumes in this fast-growing region were up almost 11 per cent in the first nine months of the year, compared to 4.2 per cent for the wider group.

The Iseq 20 index has gained 9.7 per cent in 2017, surpassing the wider Iseq overall index’s 7.9 per cent advance. Fruit and vegetables distributor Total Producer and paper packaging giant Smurfit Kappa round off the list of large-cap gainers for the year, both advancing by almost 30 per cent.

Meanwhile, cider and beer manufacturer C&C Group was the worst Iseq 20 performer, falling 27per cent, as sterling weakness, heavy competition from Heineken against its Bulmers brand in Irish pubs and overall declining revenues dragged on sentiment towards the group.

Aryzta lost almost 19 per cent as the baked goods company underwent an overhaul in its top management after a series of profit alerts over two years culminated in a major warning in January, which sent the stock tumbling. The stock has rallied off its lows in recent months amid signs that chairman Gary McGann and the new chief executive, Kevin Toland, have steadied the ship.

CRH, which surged by almost a fifth in 2016 on hopes that Donald Trump’s election as US president would boost infrastructure spending, lost more than 9 per cent this year as investors scaled back their expectations when US construction spending turned out be somewhat sluggish in 2017.