European stocks struggle while Nike weighs on US market 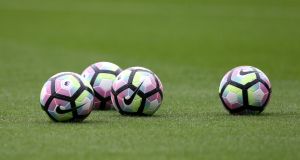 Nike’s muted forecasts hit the company’s shares in the US. Photograph: Reuters

Stocks in Europe struggled for traction and the euro declined after Catalan separatists won a regional election in Spain. Spanish stocks fell 1.15 per cent, while Spanish bonds also dropped along with peripheral European government debt, before paring their drop.

Reports showed US consumer spending rose more than forecast in November and an inflation gauge advanced – indicators that should keep the Federal Reserve on track to raise rates in 2018.

Bitcoin tumbled as much as 21 per cent as a wave of selling engulfed cryptocurrencies.

The Iseq finished up just 0.7 per cent amid low volumes in a muted half-day of trading, which was scheduled in lieu of the usual Christmas Eve half-day.

Ryanair added 0.7 per cent to €15.15, rising at the close as it recovered more of the ground lost by the stock late last week when it indicated it would reverse a long-held policy and agreed to recognise unions to avert strikes at Irish and European airports.

The FTSE 100 index of blue-chip companies declined 0.15 per cent in a half-day trading session, having earlier touched a fresh record high. Weakness among cyclical stocks at the close of the market meant the index closed below the 7,600-point level first breached in the previous session.

The index had been in positive territory for much of the session, slipping lower in the last few minutes of trading. Volumes were thin ahead of the Christmas holiday.

Shares in heavyweight financials such as HSBC, Barclays and Lloyds were down 0.1 to 1.2 per cent, while commodities stocks followed oil and copper prices lower.

While weakness in the pound helped the FTSE’s internationally-exposed stocks such as consumer staples earlier on, shares in firms such as British American Tobacco and Imperial Brands gave up earlier gains to end as much as 0.9 per cent lower.

Retailer Next was the top gainer, up 3.7 per cent, followed by household goods group Reckitt Benckiser and water company Severn Trent.

Gambling firm GVC sealed its £4 billion ($5.35 billion) takeover of Ladbrokes Coral. Shares in GVC fell 2.3 per cent, while Ladbrokes Coral advanced 1.4 per cent. Ladbrokes has gained more than 50 per cent this year.

The Stoxx Europe 600 Index slipped with Spain’s Ibex 35 leading the declines. Germany’s Dax fell almost 0.3 per cent, while France’s Cac 40 was down 0.4 per cent.

Swiss drugmaker Roche slipped 0.4 per cent to €245.90 after it said it would buy US cancer drug specialist Ignyta for $1.7 billion.

Paris-listed aerospace giant Airbus fell 0.25 per cent to €84.72 amid reports that rival Boeing was considering a merger with Brazil’s Embraer.

Volkswagen fell 0.6 per cent to €170.10. The company has cut the salaries and suspended the bonuses of 14 members of its works council as public prosecutors in Germany investigate an alleged overpayment. In November, prosecutors and tax investigators raided the offices of senior VW officials.

The blue-chip Dow Jones index was lower in thin pre-holiday trading on Friday, pressured by losses in UnitedHealth and Nike.

Shares of UnitedHealth were down 1.2 per cent after the health insurer agreed to buy Chilean healthcare company Banmedica for $2.8 billion. Nike’s forecast of muted current-quarter revenue growth took a toll on its shares, which fell 3.1 per cent in early trading.

Boeing fell almost 1 per cent to $293.42. The aerospace giant was reported to be exploring a potential combination with Brazil’s Embraer, setting the stage for a blockbuster deal that would fuel its rivalry with Airbus.

Finance Ireland refinances mortgages with low level of payment breaks 05:35
Year to remember for Fountain Healthcare Partners 05:35
Stocktake: More hollow stock market boasts from Trump 05:10
Tick all the right boxes when it comes to your house insurance 05:06
Is there a middle ground on co-living schemes in Ireland? 05:05

1 Should I switch bank now with Ulster Bank at risk of closing?
2 Tick all the right boxes when it comes to your house insurance
3 Belfast mailbox address used by account holder in Russian money-laundering scheme
4 FinCEN Files: Dublin business features in leak of US treasury documents
5 Aldi empire wracked by family feud
6 Swiss drug giant Roche pays €380m for Irish biotech Inflazome
7 Sorry, Domhnall Gleeson, I don’t want to chat to you anymore
8 A look at Elon Musk’s track record ahead of Tesla’s ‘battery day’
9 Public support must be won if renewable energy goals to be realised, conference hears
10 ESB Telecoms and Siro roll out new service to meet broadband demand
Real news has value SUBSCRIBE