Cryptocurrencies take a hit as bitcoin drops to $12,770 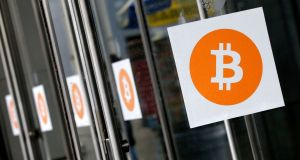 Bitcoin logos: a bitcoin selloff that began at the beginning of the week is gaining momentum, with a quarter of its value evaporating in the past 24 hours. Photograph: Mark Lennihan/AP Photo

Bitcoin’s plunge extended to almost 30 per cent on Friday as the frenzy surrounding digital currencies faced one of its biggest tests yet.

The world’s largest cryptocurrency approached $10,000 as this week’s selloff entered a fourth day with increasing momentum. It touched a record high $19,511 on Monday. Other cryptocurrencies also tumbled, ethereum dropped as much as 36 per cent and litecoin slumped as much as 43 per cent, according to composite prices on Bloomberg.

Bitcoin dropped to as low as $10,776, before recovering to $12,770 at noon in New York. It last traded below $10, 000 on December 1st, when the US Commodity Futures Trading Commission agreed to allow trading in bitcoin futures. For the week, the decline is as much as 39 per cent. The price of the digital coin had more than doubled in the prior three weeks.

This week’s losses represent a major test for the cryptocurrency industry. Bears cast doubt on the value of the virtual assets, with UBS Group this week calling bitcoin the “biggest speculative bubble in history.”

Bulls argue the technology is a game changer for the world of investment and finance. Both will be closely watching the outcome of the current selloff.