Measures include a ban on opening anonymous cryptocurrency accounts 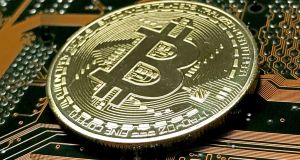 The price of bitcoin on Thursday afternoon in Seoul fell as much as 9 per cent.

Bitcoin resumed its slide on Thursday, dipping below $14,000 (€11,723) as the cryptocurrency’s dizzying drop from a record set 10 days ago intensified. The latest blow to the world’s biggest cryptocurrency came from South Korea, where the government said it was eyeing options for stamping out a frenzy of speculation, including a potential shutdown of at least some exchanges.

Bitcoin fell as much as 9 per cent to $13,828 overnight, erasing modest gains after the South Korean release, composite Bloomberg pricing shows.

Bitcoin’s plunge comes after futures contracts started trading on CME Group’s exchange, giving investors new ways to bet on the digital coin’s price moves. The news from South Korea unnerved traders because the country has been ground zero for a global surge in interest in bitcoin as its rally this year reached 1,600 per cent, prompting the nation’s prime minister to worry over the impact on Korean youth. While there’s no indication Asia’s fourth largest economy will shutter exchanges that have accounted by some measures for more than a fifth of global trading, the news is a warning as regulators express concerns about private digital currencies. South Korea will require real-name cryptocurrency transactions and impose a ban on the offering of virtual accounts by banks to crypto-exchanges, according to a statement from the Office for Government Policy Coordination.