Markets: Iseq index in Dublin closes up 1.2%, led by strong performance from Glanbia 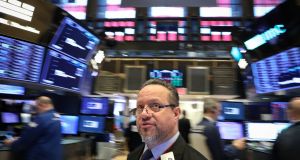 US stocks were little changed in early trading on Wednesday, as investors awaited the Federal Reserve’s minutes from its January meeting.

The Iseq closed up 1.2 per cent, outperforming the major European indices, as its major components enjoyed a positive day.

Glanbia was the standout performer after the Kilkenny-based food group reported better than expected results and unveiled an $89 million (€78.5 million) deal to buy a US ingredients company.

The FTSE 100 index finished 0.7 per cent higher after Lloyds gained after promising to return cash to shareholders and optimism prevailed over China-US trade talks.

However, Sainsbury’s fell more than 18.5 per cent after Britain’s competition regulator said its deal with Walmart-owned Asda should either be blocked entirely or require the sale of a significant number of stores and possibly one of the brands.

The stock gave up all the gains it had accumulated since the $9.5 billion deal was announced and suffered its worst day in over a decade, with a billion pounds wiped off its market value. Rival Morrisons tumbled 5.3 per cent.

Lloyds Banking Group added 4.7 per cent on its best day in 2½ years after Britain’s biggest mortgage lender raised its dividend and announced a share buyback, despite weaker than expected annual profit growth.

Glencore rose 2.5 per cent after announcing a $2 billion share buyback and an 8 per cent rise in full-year adjusted core earnings.

A standout faller was Intu Properties, which dropped 8 per cent after it scrapped its dividend, under pressure from several retail bankruptcies.

The pan-European Stoxx 600 rose 0.7 per cent after US president Donald Trump said on Tuesday that trade talks with China were going well. In Germany, the Dax rose 0.8 per cent, while the French Cac 40 finished 0.7 per cent higher.

Swedbank shares ended the day 13.6 per cent down after Estonia said it was investigating allegations linking Swedbank to suspicious transactions in the country involving Danske Bank.

Fresenius shares jumped 5 per cent after it said it expects earnings to grow faster than sales from 2020 after investments dent profit this year. Air France-KLM took 6.1 per cent after it pledged new efficiency gains to offset higher fuel costs this year.

Wall Street stocks were mixed in thin trading, while treasuries and the dollar fell as investors awaited hints on the direction of interest rates from the Federal Reserve and any clarity on trade.

The S&P 500 struggled for footing ahead of the release of the Fed’s meeting minutes on Wednesday afternoon that will give a peak into the thinking behind the central bank’s big decision last month to pause rate hikes.

Healthcare stocks declined, weighed by a 7.3 per cent fall in CVS Health Corp after the drugstore chain operator missed full-year profit forecast. Southwest Airlines slipped 5.1 per cent after the carrier said it would take a $60 million hit from the partial US government shutdown. – Additional reporting: Reuters/Bloomberg