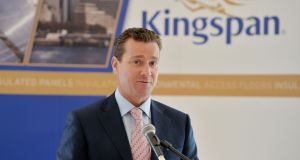 US stocks rose on Friday, led by technology shares.

Kingspan rose just over 1 per cent to €39.40, after it reported a 19 per cent rise in revenues for 2018. Chief executive Gene Murtagh said the company was “mindful” of uncertainty in the UK, but indicated its ability to plan ahead is constrained as the situation is so fluid.

Ires Reit, Ireland’s biggest institutional landlord in the residential market, rose almost 2 per cent to €1.53, after reporting profits of €120 million.

Datalex, the travel software firm, lost the ground it had gained on Thursday, after falling back by more than 4 per cent to close at 70 cents. The company has been roiled in recent weeks after the discovery of an accounting error.

Mining companies climbed to their highest in eight months as falling inventories and optimism around the US-China talks pushed copper prices higher. Glencore and BHP added more than 2 per cent each.

Consumer goods makers Unilever and Reckitt Benckiser gave up 1.5 per cent after US food company Kraft Heinz posted a quarterly loss and highlighted the tough environment for the packaged food industry.

Dairy Crest surged 15.3 per cent – its biggest one-day gain since floating in 1996 – after agreeing to be bought out by Canada’s Saputo for about £975 million.

Online trading platform CMC Markets tanked nearly 23 per cent, dragging its rivals Plus500 and IG down 5 per cent, after forecasting a bigger fall in fourth-quarter CFD and spreadbet revenue due to tighter rules by European regulators.

The food and beverage sector was the worst-performing, down 0.8 per cent, after Kraft Heinz reported weak results. AB Inbev fell 3.6 per cent, Nestlé lost 0.9 per cent and Danone dipped 0.5 per cent.

Kraft Heinz and AB InBev share a stakeholder: 3G Capital. RBC analysts said that, “given overlapping ownership between the two companies and similar cultures of margin maximisation, we wouldn’t be surprised if investors make some connection.”

In other results, Saint Gobain shares fell 1.6 per cent after the company reported a slump in annual net profit, blaming asset impairments amid uncertainty over the economy.

Technology stocks jumped 1.27 per cent, leading gains among the 11 major S&P sectors and putting the benchmark on track for four weeks of gains. The Dow Jones Industrial Average and the Nasdaq Composite were on course to post nine straight weeks of gains. Apple, Microsoft and chipmakers led the rally in the tech sector. The Philadelphia Semiconductor index gained 1.09 per cent, led by Intel’s 2.8 per cent rise after Morgan Stanley lifted its rating to “overweight”.

Kraft Heinz tumbled 27.8 per cent, weighing the most on the S&P 500 index, along with a 1.65 per cent fall in Class B shares of the company’s controlling stakeholder, Berkshire Hathaway. The packaged food company posted a quarterly loss, disclosed an SEC probe and wrote down the value of its iconic Kraft and Oscar Mayer brands.