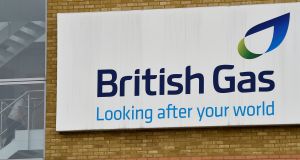 British Gas-owner Centrica dropped 11.7 per cent after warning that a national price cap on energy bills would hit its 2019 results. Photograph: Reuters

Troubled travel software firm Datalex regained some of the ground it has lost in recent months, after it finished the session up 4.3 per cent to 73 cent per share. The company has commenced a search to replace its chief financial officer, who is leaving after less than three months. Datalex has struggled recently due to accounting problems that predated the chief financial officer’s arrival.

Cider-maker C&C also performed well, gaining more than 2 per cent €3.11 ahead of a trading update next week.

Building materials giant CRH rose almost 0.5 per cent to €27.78, after Davy analysts said its “financial muscle could pave the way to a healthy rise in the dividend and possibly another share buyback”.

The FTSE 100 was down 0.9 per cent, while strength in sterling helped the domestically-focused FTSE 250 add 0.1 per cent.

British Gas-owner Centrica hit a near 16-year low and dropped 11.7 per cent after warning that a national price cap on energy bills would hit its 2019 results. BAE Systems fell 7.9 per cent on its worst day in five years. It said German moves to block exports to Saudi Arabia could hurt its deals with Riyadh and weigh on its financial performance.

Tobacco company Imperial Brands shed 4.1 per cent as the stock traded ex-dividend. In addition, CMC Markets said a risk-on attitude among investors was leading them to dump defensive stocks such as tobacco.

The announcement of additional features by Uber Eats heaped further pressure on to Just Eat. Shares fell 35.2p to 699p. The company has previously been urged by activist investor Cat Rock to seek a merger with a rival, while analysts speculated that Uber’s latest move showed it could be moving closer to acquiring either Deliveroo or Just Eat.

Shares fell more than 2 per cent at Dutch chipmaker ASM International even though it said that its fourth-quarter order intake totalled a record high €301 million, well above its forecast. However, ASM said the market for wafer fabrication equipment will decline by a mid- to high-teens percentage, according to general expectations.

Banks led shares lower across the continent as minutes of the latest European Central Bank meeting showed policymakers setting up their March gathering as a key session to render their verdict on a regional slowdown and whether new long-term bank funding is required.

Eight of the 11 major S&P sectors were lower, led by a 0.85 per cent decline in energy index after oil prices eased from their highs. Dragging the markets lower was a 0.86 per cent decline in the healthcare sector, weighed down by Johnson & Johnson, which fell 1.1 per cent. The healthcare company said it received subpoenas from US regulators related to litigation involving alleged asbestos contamination in its signature Baby Powder product line.

Biogen shares fell 3.7 per cent after brokerage Stifel downgraded the stock to “hold” from “buy”. The Nasdaq Biotech index was down 1.57 per cent.

Nike shares dropped 1.7 per cent after the company’s sneaker worn by emerging basketball star Zion Williamson split in half during a game between Duke University and North Carolina. The sportswear maker’s shares weighed the most on the consumer discretionary sector, which slipped 0.32 per cent.