European shares advance even as carmakers stuck in reverse 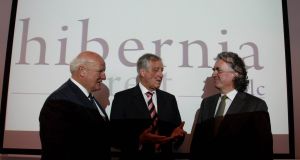 European shares rose on Monday, with the market taking its lead from a strong showing across Asia, though volumes remained thin as US markets were closed for Presidents’ Day.

However, carmakers stood out as a weak spot, after US president Donald Trump received a report that may ultimately result in the raising of tariffs on auto imports.

The pan-European Stoxx 600 index closed up 0.2 percent, steadying at its highest level since October 10th.

Banking stocks were mixed as sector followers began to position themselves ahead of a raft of results next week. Bank of Ireland, the most directly exposed lender to Brexit, lost 2.2 per cent to €5.34, with dealers saying the market would be watching closely for any update on the group’s ambitious UK targets when it reports figures next Monday.

Ryanair declined 1 per cent to €11.72, gleaning no support from Société Générale’s move on Monday to upgrade its recommendation on the carrier’s stock to “buy” from “hold”.

Gains by sterling propelled Britain’s midcap index 0.7 per cent higher to a more than three-month high, while gains in the currency and a sell-off in defensive stocks kept the blue-chip index away from its four-month highs.

However, the Ftse 100 lost 0.2 per cent, missing out on a wider optimism surrounding the Chinese-US trade talks.

Defensive stocks, which are deemed to be a safe bet at times of uncertainty, were among the big fallers. Healthcare and consumer stocks led the fall with Accendo Markets analyst Michael van Dulken pointing to some profit-taking.

As a result, oil majors BP and Shell skidded despite higher crude prices, and AstraZeneca, British American Tobacco and GlaxoSmithKline also ended in the red.

Consumer goods giant Reckitt Benckiser was a ray of sunshine, rising 4.6 per cent on its best day since late July as its fourth-quarter sales growth topped estimates thanks to improvements in its health and home and hygiene businesses.

On the small cap index, retailer McColl’s jumped 11.5 per cent after saying it was on course for higher like-for-like sales in the first quarter and Petra Diamonds added 2.3 per cent following a chief executive appointment.

A standout faller was online trading platform Plus500, which tumbled 12.8 per cent after confirming late on Friday that it failed to disclose certain losses from customer trading due to a drafting error in its 2017 report.

AIM-listed Footasylum nearly doubled in market value and bagged its biggest intra-day gain on record after JD Sports bought an 8.3 per cent stake and said it was prepared to increase its holding up to 29.9 per cent.

French car parts maker Faurecia climbed 1.3 per cent after saying it hoped to outperform the market this year and reported margin expansion, though it warned of negative auto production growth in general.

However, investors in the wider auto sector were also on tenterhooks after the US Commerce Department sent its report on national security and car imports to President Trump, setting the stage for possible tariffs. BMW lost 0.3 per cent, while Volkswagen dipped 0.8 per cent and Renault declined 1.2 per cent.

Leading the market, Wirecard shares jumped 15.2 per cent after German market regulator BaFin banned the establishment or increase of short positions in the stock.

Chipmaker AMS rose 3.5 per cent after an article by Barrons said the company was trying to diversify away from the slowing iPhone segment into other consumer areas and industrial applications.

US markets were closed for Presidents’ Day.