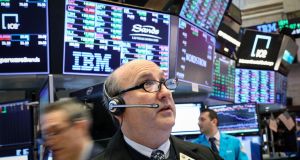 Shares rallied on Monday as US president Donald Trump appeared to defer increases in tariffs on Chinese imports and hint that he was very close to a trade deal. In Dublin, the Iseq was down just over 0.2 per cent at 6,021.15.

Shares in Bank of Ireland fell after the lender, one of the dominant players in the Irish market, reported that underlying pretax profits declined by 13 per cent last year to €935 million.

The bank’s shares ended the day 2.3 per cent down at €5.10, but the closing price masked sharper movements in the stock. “There were big, big swings within the Bank of Ireland share price throughout the day,” said one dealer. But he added that volumes, the number of shares actually traded, were not high.

The news had a knock-on effect elsewhere. Rival AIB ended the day over 1 per cent off at €3.844.

Insulation and building materials specialist Kingspan slipped 1.52 per cent to €38.80. Traders noted that the shares enjoyed a good spell last week after the group reported it had made a €445 million trading profit in 2018.

Box maker Smurfit Kappa rose 1.3 per cent to €26.26 as investors warmed towards its industry generally.

Food and ingredients group Kerry fell 1.19 per cent to €91.20, but dealers said that volumes in the stock were “thin”.

Ryanair rose 0.95 per cent to €12.165. Building materials group CRH, the index heavyweight due to report full year results later this week, was largely flat, adding just 0.14 per cent to €27.63.

Shares in Penneys owner Associated British Foods fell after the company reiterated profit expectations for the full year and said it anticipated growth across most businesses. Shares fell 1.73 per cent to 2,273 pence sterling.

Flacks Group, a Manchester-based private investor, said that it was in “very preliminary stages of evaluating a possible transaction” for clothes retailer Laura Ashley, valuing it at 2.75p a-share.

Shares in Laura Ashley dropped 1.2 per cent to 3.2p following the update, as the proposed value of the sale appeared to fall short of investor expectations. Laura Ashley ultimately closed 7 per cent up at 3.47p.

Daily Mirror publisher Reach swung to a full-year loss after being stung by hefty pension and impairment charges.

Car parts makers Hella, Faurecia and Valeo were the top performers, in a range from 3.2 to 4.3 per cent.

Covestro shares fell 3.2 per cent after the German chemicals group said its 2019 core earnings may fall as low as half of last year’s level.

French healthcare company Ipsen fell 6.5 per cent after agreeing to buy US peer Clementia Pharmaceuticals in a deal worth up to $1.31 billion.

US stocks rose on hopes of a trade deal with China. The tariff-sensitive industrials sector was 0.82 per cent higher, helped by Caterpillar Inc’s 2.3 per cent jump and Boeing’s 0.7 per cent rise.

But the sector got the biggest boost from General Electric, which leapt 8.8 per cent after announcing a sale of its biopharma business to Danaher Corp for $21.4 billion. Danaher shares were up 7.9 per cent.

Canadian miner Barrick Gold Corp offered to buy US rival Newmont Mining Corp for nearly $18 billion. However, Newmont’s shares dipped 0.2 per cent as the offer price was at a discount. Additional reporting – Reuters