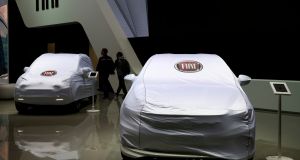 The auto index was boosted by a 5 per cent jump in Fiat Chrysler on Tuesday. Photograph: Denis Balibouse/ Reuters

European indices performed well on Tuesday with the exception of the Iseq with investors hoping for a more accommodative US policy stance at the end of the Federal Reserve’s two-day meeting this week.

The Republic’s main share index fell 0.21 per cent on the first day of its trading week.

Despite a positive set of results for forecourt retailer Applegreen, the company’s shares fell 1.03 per cent to €5.76, albeit on extremely light volume.

Online supermarket Ocado added 5.4 per cent to hit an all-time peak after posting a double-digit jump in first-quarter retail sales, despite growth being hit by last month’s fire at a large distribution centre.

Drugmaker Hikma was 2.5 per cent higher after a rating upgrade from Citi and positive comments on growth prospects from Jefferies, while events manager and publisher Informa rose 3.7 per cent on its best day in nearly 18 months after a Morgan Stanley upgrade.

Sainsbury’s ended 0.9 per cent higher. Britain’s number two supermarket chain and Walmart’s Asda committed to deliver £1 billion (€1.17 billion) of annual price cuts in an attempt to salvage their proposed merger after being dealt a potentially fatal blow by the country’s competition watchdog.

The benchmark STOXX 600 climbed 0.6 per cent in a rally spurred by investor anticipation of a more accommodative Federal Reserve.

The auto index was boosted by a 5 per cent jump in Fiat Chrysler after the president of Peugeot family holding company suggested that it was among the options for a merger, and Bank of America Merrill Lynch (BAML) recommending contrarian investors buy select carmakers. Daimler, Volkswagen and Porsche were among BAML’s top picks, helping German stocks stage a rebound from Monday’s fall to a five-month high and lead gains in the region.

Retail and basic resources stocks were also particularly strong, while bank stocks handed back early losses to trade up 0.15 per cent.

Scandal-hit Danske Bank fell more than 5.6 per cent in the aftermath of a vote by shareholders against a proposal to break up the bank.

Luxury stocks got a lift from positive trade surplus data from Switzerland, with the retail index gaining nearly 1 per cent.

French telecoms operator Iliad dropped almost 3 per cent after the company cut its cashflow target for 2020 in France and added it was considering the sale of part of its mobile assets.

Nvidia rose 3.7 per cent and boosted the Philadelphia chipmakers index by 1.19 per cent after the chip designer partnered with Softbank Group and LG Uplus to deploy cloud gaming servers in Japan and Korea.

Fox dropped 3.5 per cent after its debut on the Nasdaq, marking a new phase for billionaire Rupert Murdoch’s media business after the $71 billion (€62.5 billion) sale of Twenty-First Century Fox’s film and television assets to Walt Disney. – Additional reporting: Reuters