Stocks rise on optimism over US-China talks and Brexit

Irish market up 1.2 per cent as banks climb 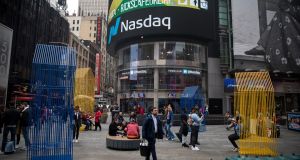 Stocks rose amid positive signs on US-China trade talks and improved sentiment following the UK’s decision to request a delay on its exit from the European Union.

But some uncertainty remained, with any delay to Brexit subject to unanimous approval from the EU, drawing some investors to defensive stocks.

Traders said the market was in “pretty solid shape overall”, with a few stocks on the move.

The financials found some strength in Brexit relief, with AIB up slightly to €4.12, and Bank of Ireland adding 3 cent to finish at €5.84.

Homebuilders on the Dublin tracked rises in their peers in London, with Cairn Homes ending the session 3 cent higher at €1.442 and Glenveagh Properties up 2 cent to 88.5 cent.

London’s FTSE 100 rose 0.6 per cent, lifted by heavyweight oil and mining stocks that were boosted by higher metals and crude prices.

Thursday night’s votes saw UK prime minister Theresa May’s government narrowly avert an attempt by MPs to seize the agenda next week if no Brexit deal has been passed, with the aim of forcing a discussion of alternative options before an EU summit on March 21st. She plans to put her deal to the vote for a third time before then.

Credit rating agency Moody’s warned that uncertainty around the Brexit outcome was very high and would continue to weigh on investment, hiring and spending decisions, which was credit negative for UK issuers.

Housebuilders, considered to be among most vulnerable to economic hits stemming from Brexit, rose on the back of Thursday’s vote and after a trading update from midcap Berkeley. Berkeley rose 1.9 per cent after it stuck to its profit target despite softness in Britain’s housing market caused by Brexit uncertainties.

European shares closed at their highest level in five months on Friday as investors cheered positive signs on US-China trade talks and the British parliament’s vote to request a delay in a potentially chaotic exit from the EU.

The pan-European Stoxx 600 was up 0.7 per cent, its biggest gain in a month, and ended the day at its highest level since October 4th.

All major bourses were in positive territory, led by Paris’s Cac 40, up 1 per cent.

Germany’s trade-sensitive Dax was up 0.85 per cent.

Turnover picked up on Friday after being generally in line with long-term averages in recent sessions – Stoxx 600 volume was almost double its 90-day average as investors rushed to position themselves ahead of another critical Brexit week.

US stocks joined a global advance in equities sparked by China’s renewed commitment to stimulus as investors grew more confident that central banks will remain accommodative.

The S&P 500 Index headed for its best week since November, with technology shares surging after a strong earnings report from Broadcom. Volumes jumped and trading was volatile amid the expiration of futures and options on both indexes and stocks.

Equities from Tokyo to London rose after the Chinese government said it would cut value-added taxes, reinforcing expectations for an eventual pick-up in the world’s second-largest economy.

Broadcom surged to a record after its forecast, lifting semiconductor stocks, and Boeing reversed losses and posted a small gain after a report it plans to upgrade software in its grounded 737 Max jets.

Global stocks are ending the week on a solid footing, wiping out the losses last week that were the worst of the year. – Additional reporting: Reuters, PA, Bloomberg