European shares end a choppy Brexit-led session with a whimper 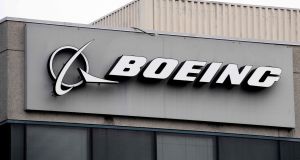 Airline shares were in the spotlight after the Boeing 737 Max 8 aircraft was grounded in many countries. Photograph: Jim Watson/AFP/Getty Images

European shares ended flat on Tuesday after a choppy session during which hopes that British prime minister Theresa May would win support for her plans for an orderly Brexit gradually faded.

European bourses trimmed their morning gains and the pan-European index ended the day down 0.04 per cent while the euro zone’s Stoxx rose a mere 0.1 per cent.

DUBLIN
The Iseq index, which typically slips on fears of a disorderly Brexit, edged up 0.25 per cent, with investors still confident a no-deal will eventually be averted.

Irish shares outperformed the rest of the euro zone in early trading with the Iseq up 1.4 per cent on news that Britain and the EU had agreed tweaks to Theresa May’s Brexit agreement. However, sentiment shifted as the day wore on after it became clear the deal was likely to be rejected.

Irish-Swiss baked goods company Aryzta was among the best performers, jumping 15 per cent in early trading and ending the day up 10.6 per cent after it reported that its US margin grew for the first time since 2014.

Datalex was up more than 16 per cent after it emerged the travel software company was in talks to sell more shares to Dermot Desmond’s investment group IIU, which is also expected to provide a €6 million loan to Datalex.

Ryanair ended the day up despite Boeing 737 Max 8 aircraft being grounded across the globe. Shares in the airline, which is due to take delivery of 200 Boeing 737 Max 8s out to 2024, jumped 1.5 per cent as shares in Norwegian Air, which flies from the Republic, fell almost 4 per cent after it grounded flights.

Financials were in focus, with banks holding most of their gains. Bank of Ireland was up 2.5 per cent with AIB up 2 per cent.

LONDON
Britain’s Ftse 100 gained on Tuesday after a fall in the pound triggered by the government’s lawyer saying last-minute assurances won by Theresa May for her Brexit deal left the risk over the Irish backstop “unchanged”.

The export-heavy main bourse and the more domestically-focused Ftse 250 were up 0.3 per cent.

Banks with a big domestic focus and house builders were among the best performers. Barclays added 1.2 per cent, state-owned lender Royal Bank of Scotland was up 0.7 per cent and home builders Persimmon and Taylor Wimpey added 1.9 per cent and 2.2 per cent respectively.

British Airways owner IAG and tour operator TUI’s London-listed shares gave up nearly 1 per cent each as part of a spillover from the suspension of Boeing’s 737 Max 8 jets.

High-street retailer Mothercare had its best day since early October after detailing plans to sell its educational toy brand Early Learning Centre as it seeks to cut debt. The stock gained 5.6 per cent.

German carmaker Volkswagen fell 1.8 per cent after reporting a decline in operating margins for its core VW brand and announcing it would introduce almost 70 new electric models by 2028.

WALL STREET
US stocks rose on Tuesday after tame inflation data supported the Federal Reserve’s dovish stance on future rate hikes, but Boeing’s fall for a second straight day in a row pressured the Dow.

Airline stocks took a hit, with the Dow Jones airlines index dropping 1.43 per cent. Boeing fell as much as 13.4 per cent on Monday and also weighed on the Dow Jones index on Tuesday, down 7.5 per cent in early trading.

All three main indexes ended higher, boosted by a tech rally from Apple, which climbed 1.6 per cent and boosted markets, after the iPhone maker invited media to a March 25th event where it is expected to launch a television and video service.
– Additional reporting: Reuters

1 Oxford Covid vaccine trials offer hope for elderly
2 Hurrah for the companies giving staff more time off
3 Ulster Bank to introduce new card payment controls on app
4 How much state pension will I get next year?
5 Sustainable investment: How your pension can help tackle climate change
6 RTÉ to seek 70 voluntary redundancies as ‘large costs’ beckon in 2021
7 Some Irish money market funds came close to danger in March
8 Apple planning updates to its AirPods earbuds next year
9 How long can Government afford to keep State pension age at 66?
10 Aryzta to pursue asset sales as takeover talks fail
Real news has value SUBSCRIBE