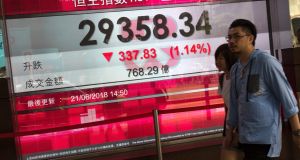 In Hong Kong the Hang Seng China Enterprises index of major mainland Chinese companies was off 2.6 per cent in afternoon trading.

Major Chinese stocks on Friday had their biggest one-day fall since October as losses for global equities rolled on into the Asia session after a policy shift from the European Central Bank set off concerns about global growth. China added to the woes when it reported its biggest drop in exports since 2016.

The CSI 300 index of Shanghai and Shenzhen-listed stocks, under pressure following a weak day on Wall Street, finished the day down 3.97 per cent after official data from Beijing showed China’s exports had dropped almost 21 per cent in February compared with a year ago.

“We find little reason to expect a rebound in the near term on the back of a sluggish global electronics cycle,” said Raymond Yeung, chief economist for greater China at ANZ. He added that weak external demand would “continue to weigh on China’s [ first quarter] growth. This requires a stronger dose of policy stimulus to support growth.”

The fall marked the worst daily performance since a drop of 4.8 per cent on October 11 for mainland stocks, while in Hong Kong the Hang Seng China Enterprises index of major mainland Chinese companies was off 2.6 per cent in afternoon trading. Hong Kong’s broader Hang Seng index fell 2 per cent.

The disappointing trade data compounded a weak lead-in from Wall Street, where the S&P 500 closed down 0.8 per cent on Thursday after the ECB sent a shudder through markets with its revival of a crisis-era stimulus programme after two years of weaning the eurozone off its easy money policies and downgraded projections for the region’s economic growth.

The dip for Chinese stocks pushed the CSI 300 down enough to leave it 0.4 per cent below its closing level at the end of February, completely erasing gains made since MSCI announced its decision to increase the weighting of mainland-listed stocks in its Emerging Markets index.

However, Alexander Treves, an investment specialist for emerging markets and Asia Pacific equities at JP Morgan Asset Management, cautioned against viewing Friday’s fall out of context. And even at its lowest point on Friday the index of large-cap stocks was still up more than 21 per cent for the year to date thanks to a dramatic rally this year after stocks sold off in late 2018 amid tightening liquidity and growing trade war worries.

“China’s a volatile market. Over the next year there will be lots of big positive days and lots of negative days,” Mr Treves sad. “What might feel like a bear market in the US feels a little bit like something more common or garden in the context of a more volatile asset class like A shares or other emerging markets.” – Copyright The Financial Times Limited 2019