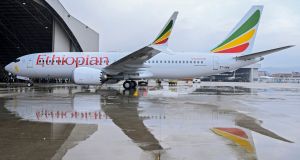 The share move was the biggest fall in Boeing’s stock in nearly two decades, halting a surge that has seen it triple in value in just over three years to a record high of $446 last week.

A Nairobi-bound Boeing 737 MAX 8 operated by Ethiopian Airlines crashed minutes after takeoff from Addis Ababa on Sunday, killing all 157 on board. The same model, flown by Lion Air, crashed off the coast of Indonesia in October, killing all 189 on board.

China’s aviation regulator on Monday grounded nearly 100 Boeing 737 MAX 8 aircraft operated by its airlines after the crash. The CAA said it would contact the US Federal Aviation Administration (FAA) and Boeing regarding the resumption of operations once it was assured that measures have been taken to ensure safety.

In a statement, the FAA said it would tell international airlines that it believes the Boeing 737 Max 8 is airworthy. Ryanair is among the airlines worldwide that have ordered this version of the aircraft.

Boeing said on Monday the investigation into the Ethiopian Airlines crash is in its early stages, and there is no need to issue new guidance to operators of its 737 MAX 8 aircraft based on the information it has so far.

“Though it is early to draw conclusions, there may be concerns of disruption around safety, production, groundings, and/or costs, all of which should be manageable longer-term.”

He said he was not changing the bank’s positive “overweight” recommendation on Boeing shares for its customers, and that any corrective action the company had to take on its best-selling passenger plane would likely prove a longer-term buying opportunity.

Other major Wall Street brokerages were yet to take a stance on the crash.

Boeing’s shares lost 12 per cent in the weeks following the Lion Air crash last year, but have more than recouped those declines.

Investors will also be watching shares in some of the company’s big airline customers, which include Dallas-based Southwest Airlines, the biggest operator of the MAX 8, and American Airlines Group and Air Canada .

Southwest and American said overnight they remained fully confident in the aircraft, and were closely monitoring the investigation.

The 737 MAX 8 uses LEAP-1B engines made by CFM International, a joint venture of General Electric and Safran. Shares in Safran fell 1.6 per cent on Monday. Shares of rival Airbus were up 0.5 per cent. – Reuters