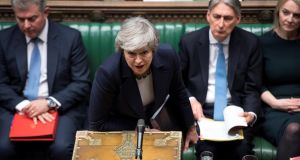 Britain’s prime minister Theresa May in the House of Commons on Wednesday. Photograph: Reuters

Irish shares and the wider European market advanced on Wednesday as investors bet UK parliamentarians would reject a chaotic no-deal Brexit some 24 hours after they voted down prime minister Theresa May’s European Union withdrawal agreement for a second time.

Mrs May told members of parliament on Tuesday evening – as they voted by a majority of 149 against a tweaked withdrawal deal – that they would ultimately have to decide if they wanted to revoke the UK’s article 50 exit intention, hold a second referendum or leave the EU “with a deal but not this deal”.

Datalex jumped 12.4 per cent to 91c – bringing its rally over two sessions to 30 per cent – after it emerged that the troubled retail software provider for the travel industry is in talks to secure €10 million in additional equity funding and a loan from its main shareholder, Dermot Desmond’s firm IIU.

Aryzta jumped 11.8 per cent after the baked-goods maker unveiled a set of better-than-expected results that pointed towards stabilisation in its business.

However, banking stocks were largely under pressure, with Permanent TSB off 2.1 per cent at €1.37, while AIB declined by 0.8 per cent to €4.

The FTSE 100 ended the session virtually unchanged, with gains in oil majors offset by a drop in tobacco stocks and as investors remained cautious before a second pivotal Brexit vote of the week.

Oil heavyweights Shell and BP gained on the main bourse as oil prices rose on ongoing supply cuts from producer group Opec and US sanctions against Iran and Venezuela.

The index was also supported by Standard Life Aberdeen, which rose 2.4 per cent on its best day since early January after posting full-year results and saying that it was doing away with a dual-chief executive management structure.

Gains on the main index were limited by tobacco firms British American Tobacco and Imperial Brands, which fell after US National Cancer Institute director Norman Sharpless was named as acting US Food and Drug Administration chief.

Gambling firm GVC skidded 4.6 per cent to its lowest level since June 2016.

On the mid-caps, G4S, the world’s biggest security firm, lost 4.6 per cent as RBC cut its price target after what the brokerage called “messy” results and said it was sceptical of the company’s plan to separate its cash business.

“This process of adjusting their store estate is surprising investors and happening faster than people expected,” said Alistair Wittet, European equities portfolio manager at Comgest, which holds 11.19 million shares in Inditex and is the 13th biggest investor, according to Refinitiv data.

Germany’s Adidas lost 2.4 per cent after announcing supply-chain issues would hit its sales growth in the first half of 2019, particularly in North America.

Wirecard was Europe’s worst performer, falling 6.6 per cent after it suspended an accounting employee in Singapore amid allegations of fraud and creative accounting.

Shares in Norwegian Air dipped 1.5 per cent after it said it would seek compensation from planemaker Boeing for lost revenue and extra costs after grounding its fleet of 737 MAX 8 aircraft in the wake of the Ethiopian Airlines crash.

Producer prices barely rose in February, resulting in the smallest annual increase in more than 1½ years, yet another indication of benign inflation.

Technology shares rose, propped up by Microsoft and Apple.

CVS Health rose and was among the biggest gainers on the S&P after Bernstein began coverage of the pharmacy benefit manager with an “outperform” rating. – Additional reporting: Reuters