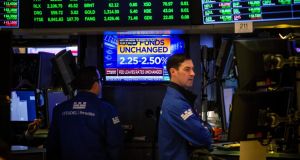 In New York, a plunge in Boeing shares set the Dow Jones Industrial index for a sharp fall at the open on Monday. Photograph: Michael Nagle/Bloomberg

Technology stocks led Wall Street’s main indexes higher on Monday after five straight sessions of declines, but a fall in the shares of Boeing, the world’s largest planemaker, after a fatal crash in Ethiopia, limited gains on the blue-chip Dow.

In Europe, shares recovered somewhat after sharp declines at the end of last week. The Iseq 20 index in Dublin rose almost 0.6 per cent.

Shares of Ryanair were down 1.8 per cent to €11.90. The low-cost carrier said its board had passed resolutions to protect its EU airline licences after Brexit. But traders cited concerns about possible disruptions from Brexit even despite the contingency plans.

Bank of Ireland rose 2.6 per cent to €5.52, while AIB was up 1.2 per cent to €3.95, as European banks generally were lifted by the return of merger speculation to the sector.

Paddy Power Betfair performed strongly, rising more than 3.9 per cent to €66.80, as investors continued to absorb its impending name change to Flutter Entertainment.

Significant fallers included Kingspan, down 1.8 per cent to €42.36, despite a rebound in indicators of Irish construction activity.

Britain’s FTSE 100 kicked off a week of key Brexit votes in parliament on a strong note, with financial stocks shrugging off fears of a potentially disruptive no-deal divorce and a weaker sterling buoying exporters.

Challenger banks OneSavings and Charter Court Financial Services surged more than 9 per cent, topping the mid-cap index, after confirming merger talks which analysts at Investec described as “a marriage made in heaven”.

Superdry launched an assault on the fashion chain’s co-founder Julian Dunkerton, branding his attempt to return to the company “extremely damaging”. Shares in the company were 7.5p lower at 514.5p.

Boardroom drama also continued to simmer at Debenhams, which confirmed it is in advanced talks to borrow £150 million to stay afloat, just days after Mike Ashley launched an aggressive bid to seize control of the retailer.

Shares in Deutsche Bank and Commerzbank traded higher as German business warmed to the prospect of a tie-up between the country’s two largest banks.

Swiss industrial machinery firm VAT Group tumbled 4.6 per cent after it reported lower full-year earnings than expected and a weaker guidance for 2019.

A plunge in the shares of the world’s largest planemaker after a fatal crash in Ethiopia set the Dow Jones Industrial index for a sharp fall at the open on Monday and capped gains in the broader markets.

Boeing, the best performing Dow component this year by a wide margin, tumbled 11.5 per cent in premarket trading, and appeared on track for its worst day in nearly two decades after many airlines grounded the company’s new 737 MAX 8 passenger jet following the second deadly crash in just five months.

Shares of American Airlines Group, Southwest Airlines and JetBlue Airways also dropped between 1.1 per cent and 2.5 per cent on the news.

Apple rose 1.8 per cent after Bank of America Merrill Lynch upgraded the iPhone maker’s shares to “buy” from “neutral” saying the pull back in its stock presented a buying opportunity.

Markets shrugged off data which showed US retail sales unexpectedly rose in January, lifted by an increase in purchases of building materials and discretionary spending, but receipts in December were much weaker than initially thought. – (Additional reporting: Reuters/PA/Bloomberg)