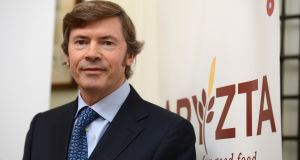 Shares across Europe rose on Monday, boosted by mining stocks and a flurry of deal-making activity. Airline shares were hit in later trading as the US east coast braced itself for Storm Stella.

Investors also stayed cautious ahead of Wednesday’s Dutch election and an expected US rate hike, as well as a G20 finance ministers’ meeting on Friday.

It was a quiet start of the week in Dublin with the Iseq index closing virtually unchanged at 6,668.37.

Swiss-Irish food group Aryzta dominated after announcing a 31.3 per cent decline in half-year earnings and the early departure of a number of leading executives. Shares in the company closed down 2.3 per cent to €30.07 having fallen by as much as 7 per cent in earlier trading.

Fourcourt operator Applegreen, which is due to update investors on its 2016 performance on Tuesday, was up 2.1 per cent to €4.85 on expectations of higher earnings.

Financial stocks were lower with Bank of Ireland down 1.6 per cent to 24.3 cent and Permanent TSB losing 1 per cent to €2.62.

British shares started the week on a firm footing as mining stocks rallied, with deal-making helping the mid-cap index to a record high. The blue chip FTSE 100 index ended the day up 0.3 per cent at 7,367.08 points, while the FTSE 250 gained 0.4 per cent, posting a record close after hitting a new all-time high of 19,048.96 points.

Amec Foster soared 15.4 per cent, before paring back to close up 11.6 per cent, after an offer from oilfield services company John Wood in a deal valued at around $2.7 billion. Acquirer John Wood’s shares closed up 1.4 per cent.

Bovis Homes jumped 10 per cent after peer Galliford Try made a bid for the homebuilder. Providence Resources gained nearly 7 per cent with two million shares traded in London.

The pan-European Stoxx 600 index closed up 0.4 per cent, notching up a fourth day of gains.

Specialty pharmaceutical company Indivior fell 3.2 per cent after RBC downgraded the stock to “sector perform” from “outperform”, saying the company’s shares would be dominated by litigation in 2017.

The $15 billion Intel takeover of Israeli driverless car tech firm Mobileye drove semiconductor makers Infineon and STMicro to gain 1.1 per cent and 0.2 per cent respectively on hopes of more consolidation in the auto tech sector.

The S&P 500 and the Dow trended lower in afternoon trading on Monday as drug stocks fell, while investors awaited a widely expected interest rate hike later this week.

The 11 major S&P 500 sectors were all trading within small ranges, with the healthcare sector slipping 0.34 per cent and on track to snap a three-day winning streak.

Wynn Resorts was the top stock on the S&P, up 4 per cent at $103.58 after Morgan Stanley reiterated its “buy” rating and said the company could gain a meaningful market share in Macau.