What to expect in UK markets when May pulls Brexit trigger

Some analysts say Brexit-related weakness is already priced in; others say risks remain

British Prime Minister Theresa May confirms that she intends to trigger article 50 at the end of March. Video: EU Commission 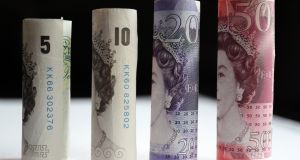 The pound has slumped 18 per cent and the country’s benchmark equities index has rallied about 16 per cent since the June 23rd referendum. Photograph: Chris Radburn/PA Wire

The trigger of Article 50 is the event traders have been waiting for since the UK voted to leave the European Union. Yet as prime minister Theresa May approaches her end of March deadline for launching Brexit, there is no consensus on what it means for markets.

The pound has slumped 18 per cent and the country’s benchmark equities index has rallied about 16 per cent since the June 23rd referendum. While currency and stock volatility is now calmer ahead of the talks, some analysts are warning markets are too complacent in expecting a smooth path toward an agreement.

Is Article 50 already baked into sterling?

No, says Bank of America Merrill Lynch. “We reject the notion that sterling has fully priced Article 50 and beyond. Risks to the currency remain to the downside on a disruptive start to negotiations,” strategists including Kamal Sharma said in a note to clients on March 2nd, adding they see a dip before a recovery into the end of the year.

JP Morgan Chase & Co is also bearish. It recommended on March 3rd selling the pound against the dollar at 1.2250, with a stop at 1.2530, as it sees the currency as the most over-valued in the Group-of-10 and investor confidence as vulnerable.

Bank of America’s preferred strategy is to bet on greater swings in the pound, rather than its direction. It has recommended buying three-month forward volatility, a measure of expected swings, with a target for it to gain about 20 per cent from current levels. Societe Generale SA also sees opportunity in options, as it expects two-month implied volatility to pick up if cable falls below $1.20.

Meanwhile, Morgan Stanley is more sanguine and thinks the triggering of Article 50 shouldn’t come as a major surprise. “There may be many Article 50-related news headlines in the coming weeks but we believe that a lot of the negativity around Brexit-related economic data weakness is already in the price,” strategists led by Hans Redeker said in a March 2nd note.

The bank initiated a long sterling versus the euro trade recommendation last month and is targeting a move to 0.8000, as it sees political risks in the euro zone remaining high.

What are key things to watch during negotiations?

The key question is whether economics or populist politics dominate the negotiations, according to Bank of America economist Robert Wood. It should become apparent relatively early into the formal talks that the UK is on course for a harder Brexit, with all of the economic disruption that leaving Europe’s single market is likely to entail, according to JPMorgan.

Traders will focus on what the process means for the financial services industry, a key contributor to the economy, and any signs that banking or broader investment is being relocated out of the UK could potentially have a negative effect on the currency, said Viraj Patel, a London-based strategist at ING Groep NV.

How will Article 50 affect stock allocations?

UK equity investors are not losing any sleep over Article 50. In fact, stock volatility as measured by the VFTSE Index is near a record low. That’s in large part because members of the benchmark FTSE 100 Index get about three-quarters of sales from abroad, so their profits have been benefiting from the slide in the pound. If the currency sees a significant drop from here, the index may rise further, after hitting a record high this month.

Yet some analysts argue that upside is limited, as the weak pound has been priced in. Members of the FTSE 250 Index get about half of revenues from the UK, and that’s at 70 per cent for the FTSE Local UK Index, so these firms may struggle if UK growth shows more signs of a slowdown. Investors will watch housebuilding shares, which have defied expectations since the vote, and may retreat if the economy shows significant weakness.

Bank of America expects a rising risk premium for holding gilts as a result of political headlines early on in the negotiations, and recommends being short five-year gilts versus overnight indexed swaps. JPMorgan also has a bearish view, expecting “market noise” following the Article 50 trigger, and is staying short 10-year gilts. Citigroup Inc. is targeting 10-year yields to fall to 1 per cent on a pessimistic economic outlook as consumers start to feel the pinch.