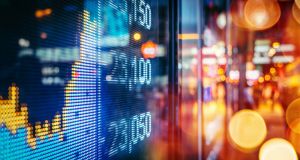 MSCI’s broadest index of Asia-Pacific shares outside Japan slipped more than 1 per cent, its biggest daily percentage drop since February 9th when world financial markets were battered by concerns US inflation is picking up.

The index is now down nearly 5 per cent in February.

Japan’s Nikkei stumbled 1 per cent on a slightly firmer yen.

In an indication of the dour mood, S&P E- Mini futures slipped 0.1 per cent while FTSE futures were off 0.6 per cent.

Asian markets had opened mildly lower but selling intensified after data showed growth in China’s manufacturing sector in February slowed more than expected to the weakest in over 1-1/2 years.

The weakness was driven by disruption due to the Lunar New Year holidays and curbs to factory output from tougher pollution rules, but there are worries of a bigger loss in momentum.

Julian Evans-Pritchard, senior China Economist at Capital Economics, said the “the risk is still that the economy fares worse this year than is generally expected.”

Some analysts cautioned the timing of the long holiday may have skewed the activity readings.

In Japan, the world’s third-largest economy, industrial output in January took its biggest tumble since a devastating earthquake in March 2011, highlighting a weakening in demand and a build up of inventory.

Growth in India’s factory activity slowed too in February.

Sentiment across financial markets was already sour after Fed’s Jerome Powell gave an upbeat view of the US economy on Tuesday and said recent data had strengthened his confidence on inflation.

When asked about likely catalysts for more than three rate hikes in 2018, he said each member would write a new “dot plot” rate path ahead of the March meeting and that he wouldn’t want to prejudge that outcome.

Rate futures fell following Mr Powell’s remarks as traders began pricing in about a one-in-three chance of a fourth hike this year.

Fears of faster US rate hikes have caused anxiety that other central banks will start to tighten policy and raise borrowing costs. That would in turn hurt corporate earnings, clouding the outlook for what had been expected to be another solid year of global economic growth.

“Today’s comments appear to open the door for others on the (Fed) Committee to revise their forecast as they see fit, and that Mr Powell himself may be inclined to look for four hikes this year,” JPMorgan economist Michael Feroli said in a note.

The Fed moved three times in 2017 and is seen as certain to do the same or more this year, with the first move expected as early as March.

The dollar held on to gains after rallying against most major currencies on Tuesday.

It hovered near a recent 1-1/2 month top against the Australian dollar and held near a three-week high on the euro at $1.2221.

However, it did not fare well against the Japanese yen, a perceived safe haven. The dollar was last down 0.2 per cent at 107.10 yen.

Dollar bulls were wrongfooted after the Bank of Japan announced it would trim the amount of super long Japanese government bonds it offered to purchase at its regular debt-buying operation.

Analysts are predicting a stronger yen this year despite faster US rate rises, although speculators and Japanese retail investors have built huge short positions in yen futures setting the scene for a massive shakeout.

In commodities, oil prices extended declines on weak output data from China and Japan and as an industry data showed an increase in US crude stockpiles.

1 Chris Johns: Ireland risks populist culture war over property and pensions
2 Javid’s EU divergence plans provoke industry backlash
3 Big spending election promises and Dublin hotel room taxes
4 Inbreeding poses major threat to Ireland’s thoroughbred horse sector
5 ‘Life in Vilnius reminds me of Ireland in the 1990s’
6 GoMo is being investigated by advertising authority
7 ‘I’ve always found it easier to convince the bank to lend me money than to save’
8 Irish people like nothing more than being bribed with their own money
Real news has value SUBSCRIBE