Markets slip amid indications of US interest rate rises 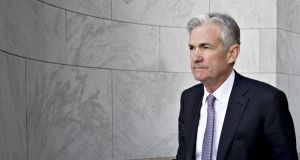 Markets slipped on Tuesday as new US Federal Reserve chairman Jerome Powell indicated that he would raise interest rates gradually in the world’s biggest economy.

Insurer FBD was the star performer after reporting that underwriting profits rose to almost €45 million last year from €3.2 million in 2016.

Shares surged 14.83 per cent to €12, a one-year high for the stock, following the news. Traders noted that volumes in the insurer’s shares were light.

Hotelier Dalata, owner of the Clayton, Maldron and Clarion chains, climbed 2.94 per cent. The group said that profits for 2017 jumped 75 per cent to €77.3 million.

Bank of Ireland gained 1.33 per cent to close at €7.64, making up ground that it lost on Monday after reporting results.

Rival AIB, also due to publish its 2017 numbers this week, inched up 0.19 per cent to €5.17 after close to four million of its shares changed hands.

Index heavyweight, CRH, fell 1.42 per cent to €27.73. The building materials giant is yet another Irish company scheduled to report results in coming days.

Britain’s top share index closed down 0.1 percent, with Sky soaring 20.5 per cent to 1,300 pence sterling as investors priced in a possible bidding war for the company following Comcast’s surprise move.

Rival broadcaster ITV rose 1 per cent. The offer from the $184 billion US media giant could scupper the plans of Rupert Murdoch’s Fox to buy out Sky and sell it to Walt Disney.

Standard Chartered rose 1.2 per cent to 839p after it joined rival UK banks in resuming dividend payments as profits soared, though weaker than expected revenue kept investor exuberance in check.

Housebuilders gained after Persimmon announced a more than doubling of dividend payments, a 25 per cent jump in profits and a 7 per cent increase in reservation rates.

Persimmon was forced to scale back its management bonus plan this week after widespread criticism that it could have netted bosses more than £200 million from share options.

Troubled subprime lender Provident Financial saw its shares surge 70.4 per cent to 1,002p, their highest in six months, after the company said it would raise £331 million via a rights issue.

Woodies DIY’s London-listed owner, Grafton, edged up 0.63 per cent to 798p. The Irish group, which has businesses in the Republic and UK, will report 2017 results on Thursday.

Europe’s media index was the top-performing sector, up 1.2 per cent at a one-month high while banks, which typically benefit from rising rates, added 0.5 percent on average.

Shares in Poste Italiane advanced 5.8 per cent after the group said that it would raise dividends and boost profits through new insurance products and parcel deliveries under a five-year business plan.

French real estate group Gecina posted the worst performance with its shares falling 5.5 percent after Ivanho Cambridge sold part of its stake at a 4.5 per cent discount to the last closing price.

Wall Street’s main indices fell in choppy trading as US bond yields rose after new Fed Chairman Jerome Powell said the economy was strengthening and that inflation would rise.

Following his comments, traders of US short-term interest rate futures began pricing in a higher chance of a fourth rate hike this year, based on a Reuters analysis. The benchmark US 10-year Treasury yields rose to a session high of 2.914 per cent.

Its shares jumped 11 percent. Fitbit slumped more than 10 per cent after the wearable device maker forecast current-quarter results below estimates.

1 Volvo warns of scaled back car line-up if UK splits from EU rules
2 NI house builder apologises to Harry and Meghan over adverts
3 Little strategic thinking in election manifestos of Fine Gael and Fianna Fáil
4 Are there annual limits on inheritances or gifts to a child?
5 Opioid executive admits to ‘no morals’ ahead of prison term
6 US threatens retaliation against EU over proposed carbon tax
7 CPL founders Anne Heraty and Paul Carroll in line for €1m dividend payout
8 Who are Ireland’s 17 billionaires?
9 RTÉ’s multiple lobbying meetings with politicians
10 South Dublin Credit Union members urged to borrow more to ensure survival
Real news has value SUBSCRIBE