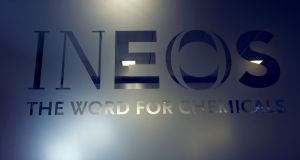 Ineos has been growing with acquisitions of oil and gas fields. File photograph: Denis Balibouse/Reuters

The factories will be part of a $5 billion petrochemical complex which state-run Saudi Aramco and France’s Total are constructing in the kingdom, Ineos said in a statement.

The British company has been growing with acquisitions of oil and gas fields and a major pipeline in the UK, chemical facilities in China, and investments in plants in Belgium and the United States.

Mr Ratcliffe (66), a former Exxon Mobil executive, built Ineos by acquiring unwanted petrochemical assets from major oil companies. The group has also dipped its toes in fashion, soccer, car-making and a cycling team over the years. With the planned Saudi investment, it’s expanding its core business of chemicals.