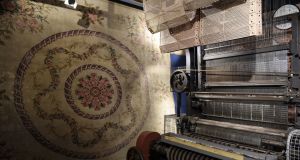 An original Axminster carpet from the 1770s, designed by the company’s founder, Thomas Whitty, beside a loom from the 1950s, on display inside the Axminster Heritage Centre in Axminster, England. Photograph: Mary Turner/The New York Times

The royal coat of arms is affixed to a sign on the front of the Axminster Carpets factory, near the train station in a town of 6,000 in southwest England. Beneath the seal are the words “By Appointment to Her Majesty the Queen/Carpet Manufacturer”.

Known as a “royal warrant”, the seal and text are the ultimate product endorsement, an honour currently bestowed on 816 businesses in Britain, from dry cleaners to fishmongers.

Axminster Carpets, which was founded in 1755, became part of this elite group by producing plush, colourful carpets that are in Buckingham Palace, Windsor Castle and other royalty-owned addresses. Just don’t expect to see photos of these bespoke works in any promotional material. The warrant comes with plenty of rules.

“We’d like to be shouting from the rooftops, but we’re not allowed,” said Jonathan Young, Axminster’s managing director.

“We can’t show any pictures of the carpets we make for the royal family on any of the social media platforms, or any of our own marketing, which is really unfortunate.”

As it happens, there are plenty of Axminster carpets on Twitter. Just not the ones the company would like to highlight. Through a series of improbable events, Axminster Carpets is now closely linked with a corporation that, image-wise, is the opposite of aristocratic. Namely, JD Wetherspoon, a chain of just under 900 pubs selling cut-price beer, 12-ounce rump steaks and other affordable fare throughout Britain and Ireland.

The story of the public’s association of Axminster Carpets with JD Wetherspoon begins in 2015. That year, a writer and lager enthusiast, Kit Caless, started Wetherspoon’s Carpets, a blog that catalogued the floor coverings of the company’s pubs. Initially, he assumed that most of the carpets would turn out to be identical.

But when friends and Twitter followers started to post photos from their local ’Spoon, more than 700 images poured in, and Caless made an amazing discovery. Every carpet was different.

“The weird thing is that no one knew about this,” Caless said in a recent phone interview. “It was even news to the head of PR at JD Wetherspoon when I called him.”

Why would a chain of pubs commission an original carpet for each pub, at a cost of about $30,000, no less? JD Wetherspoon sells roughly one million discounted pints of beer a week to hordes of drinkers. Few of them seem concerned with quality furnishings.

“I used to have people stub out their cigarettes on the carpet,” said Tim Martin, the founder and chairman of JD Wetherspoon. “The new Axminster! Occasionally they’d do this while talking to me.”

Martin explained that, when he created JD Wetherspoon, in 1979, he decided that every pub needed its own atmosphere and soul. That meant lots of local art, photographs and an original, singular carpet.

Not until 2016, when Caless published a book called “Spoon’s Carpets: An Appreciation”, did the public learn that the barely noticed rugs were one-off designs, meticulously crafted.

Axminster Carpets, as it happens, had the JD Wetherspoon contract for only two years, during which time it produced about 100 pub carpets. The rest of the Axminsters in JD Wetherspoons were made by rival companies.

That’s because nobody ever patented “Axminster,” and now, like Xerox and Thermos, the word has evolved from brand name to generic term in Britain. Today, Axminster is a style of carpet, one defined by detail and brilliant hues, and sold by manufacturers around the world.

This is hardly ideal for Axminster Carpets. Its administrative offices, which are attached to the factory, are filled with framed photographs of expensive hotels and stately mansions, each featuring what employees here like to call “an Axminster from Axminster”. There is not a pub photograph in sight.

One recent afternoon, a handful of looms in the factory were churning out carpets, and the building pulsed with a noisy, arrhythmic heartbeat. The largest loom is a vast and elaborate contraption that sprawls across two cavernous rooms and is operated with computers and cameras.

Hundreds of bobbins attached to wooden beams fed thread through tubes and into a mechanical weaver. With each eardrum-vibrating second, another fraction of the carpet came to life.

“This one is 72 tufts per square inch,” a production manager, Barry Searle, shouted over the din. “It’s like high-definition telly. You get a better picture.”

In a few more hours, a finished carpet festooned with red dragons and blue trim would emerge, containing 2.9 million tufts of yarn.

Subtract the modern technology and the process is nearly identical to the one used more than 250 years ago, when the company was founded by Thomas Whitty.

In 1754, Whitty was a local cloth maker with more ambition than status. That year, he travelled to London to visit a friend and ironmonger, who had recently imported a batch of seamless and very pricey Turkish carpets. Whitty spotted a business opportunity. He would produce similar carpets at a fraction of the cost.

Through an ad in a newspaper, he discovered a high-end carpet factory in London run by a French refugee, Peter Parisot. Back he went to the nation’s capital, this time hoping for a sneaky, up-close look at Parisot’s looms and methods. Whitty befriended the father of an apprentice in the factory and, over a pot of coffee, persuaded him to arrange a tour of the premises, under the pretence that Whitty was a relative.

It was an early and effective example of corporate espionage. Once he had opened his own factory, his approach to underselling his rivals was both simple and, by today’s standards, criminal. Many of his employees were children, some paupers, hired at one-sixth the cost of men.

Within a few decades, Whitty’s carpets were renowned, initially for their value and later, after his competitors went out of business, for their beauty.

“The carpets are equally durable with the Turky,” she wrote, “but surpass them in colours and figure.”

International acclaim followed. When the first US Senate met in 1790, in Philadelphia, a specially commissioned Axminster, with the new country’s Great Seal, covered the floor.

The company went bankrupt in 1835. For a century, the brand lay dormant until a businessman, Harry Dutfield, revived it. Soon enough, “Axminsters from Axminster” were sold to places like the Royal Albert Hall, which commissioned 43,000 square feet of carpet for rooms, corridors and landings.

Naturally, the owners of Axminster Carpets would love Britons to think of the monarchy’s imprimatur whenever they hear the company’s name. A royal warrant isn’t easily acquired. A company must sell products or services to the Windsors in order to qualify, but that isn’t enough. A thumbs-up is needed from Queen Elizabeth; her husband, Prince Philip; or her son, Prince Charles – who are somewhat momentously dubbed “the Grantors” on the royal website.

The work with JD Wetherspoon began in 2008. While the contract was relatively brief, it has come with one enduring upside.

“If you Google ‘JD Wetherspoon’ and ‘carpet,’ what immediately comes up is Axminster Carpets,” said Young, the managing director. Up to 10 times a year, a fan of JD Wetherspoon carpets calls to order something similar.

“We never signed an exclusive design agreement with the company,” he said. “So, we could make it again.”