Is Smurfit Kappa a sitting duck for an activist investor as others box up and move? 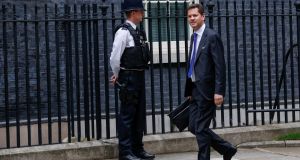 Just weeks after US packaging group International Paper (IP) decided last June to abandon its pursuit of Smurfit Kappa, it landed upon another buying opportunity: itself.

The Memphis-based company’s board approved a multi-billion-dollar share buyback programme in July and, within months, was repurchasing stock under the plan with gusto.

While some analysts have speculated that IP will make another approach for Smurfit Kappa as a 12-month bid ban – under Irish takeover rules – runs out on June 6th, investors aren’t so optimistic.

Tony Smurfit, the Irish group’s chief executive, said after the group’s annual general meeting (agm) earlier this month that it would assess any offers “as they come”. But IP surely got the message loud and clear last year as it walked away, citing a “lack of engagement by Smurfit Kappa’s board of directors and management” on trying to secure an agreeable deal.

Just this week, traders at Wall Street bank Goldman Sachs placed about a 3 per cent stake in Smurfit Kappa on the stock market on behalf of a client – triggering a slump of as much as 6.5 per cent in the shares. Singapore’s $100 billion-plus sovereign wealth fund, GIC confirmed market speculation on Friday afternoon that it was behind the trade.

Another former top-five investor, London-based Janus Henderson, which mounted a public campaign last year against Smurfit Kappa’s refusal to enter takeover talks with IP, cut its stake from 3.9 per cent last August to below the 3 per cent threshold at which investors must disclose their holdings to the stock market. It is understood that Janus Henderson has cut its holding substantially since then.

Sentiment towards the wider paper packaging sector has soured significantly in the past year, principally amid concerns over global growth. (Indeed, the stock portion of IP’s proposal last year has declined in value by virtue of the US company’s own share price decline.)

Demand for cardboard boxes has traditionally been a function of the state of the underlying economy. In Europe, the volume of corrugated cardboard Smurfit Kappa sold in the first quarter rose by an annual rate of 2 per cent, down from 3 per cent a year earlier.

Smurfit acknowledged on a call with analysts earlier this month that demand in Germany, which narrowly avoided recession late last year, “has been pretty slow”, while activity in the UK “was pretty difficult in March” – though it has since picked up. Spain, on the other hand, has been “exceptionally strong”, while eastern Europe, where the company has been active on the acquisitions front this year, is also doing well.

Cardboard-box prices were flat in the first three months of this year compared with the end of 2018 and the chief executive predicted that they would decline in the second half of 2019. Still, the company’s UK peer Mondi surprised the market this week when it announced it plans to increase the price of certain grades of containerboard by €60 a tonne.

“This is the first really encouraging sign to come from the sector in six or seven months and should lift confidence. We’d expect Smurfit Kappa to follow suit,” said David O’Brien, an analyst with Goodbody Stockbrokers.

However, some industry followers see the Mondi announcement as more of a tactical move to try and draw a line under price declines. Making planned new prices stick may be difficult.

Smurfit Kappa said last year that IP’s proposal failed to reflect the group’s “intrinsic value, track record and superior prospects as an independent business” – which would be helped by its own €1.6 billion, four-year investment plan unveiled just weeks before IP started banging on the door.

The long-term prospects for Smurfit Kappa are as healthy as ever. It stands to be a massive beneficiary from the ongoing revolution in online shopping and a progressive move from plastics to paper-based packaging. Its earnings before interest, tax, depreciation and amortisation (ebitda) margin, at 18.3 per cent in the first quarter, is as high as it’s ever been, helped by Smurfit Kappa’s relentless focus on costs and its ability to squeeze impressive synergies out of merger and acquisition (M&A) deals.

“We’d love our share price to be higher. It’s a conundrum for us,” Smurfit said earlier this month, adding that his team can only focus on delivering strong earnings and believe that they will eventually be reflected in the stock.

Still, some observers believe the group is now an open target for an activist type of investor – who’d be only too happy to offer advice on how to solve Smurfit’s share price head-scratcher.