Ecocem forced to halt planned €45m cement mill in US 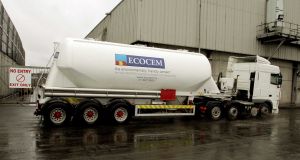 Ecocem’s plan to build a €45 million mill in the US has ground to a halt after its partner in the project withdrew. Photograph: David Sleator

Irish cement maker Ecocem’s plan to build a €45 million mill in the United States has ground to a halt after its partner in the project withdrew.

Krista Kim, lawyer for Orcem’s development partner, Vallejo Marine Terminal (VMT), has told the city’s council that her client no longer supported the project and would withdraw from this week’s scheduled planning appeal.

According to city manager Greg Nyhoff VMT’s withdrawal “effectively terminates the proposed project” as the marine terminal company owned the site on which Orcem wanted to build its mill.

A statement from Mr Nyhoff’s office confirmed VMT’s withdrawal and cancelled the public planning appeal that the city council had been due to hear on Thursday, May 30th.

The council was due to both hear the appeal and consider a final environmental report on the project.

Vallejo’s planning commission rejected the proposal in March 2017 saying the mill would have a negative impact on nearby neighbourhoods, increase traffic and was inconsistent with development policy.

VMT and Orcem appealed this to the council, whose members sought the final environmental report after hearing the developers’ challenge at a public meeting in June 2017.

Orcem wanted to spend €45 million building a plant that would have ground slag from iron furnaces to make cement. Ecocem says that this process cuts normal cement manufacturing greenhouse gas emissions by 90 per cent.

Locals opposed the plan as they feared its impact on the environment, particularly on neighbourhoods close to the site, which originally housed a flour mill.

Ecocem’s US unit maintained that it exceeded planning law requirements, including by paying for an environmental justice analysis, which it was not required to do.

The company’s president, Steve Bryan, has said that the project could create at least 190 jobs, including pensionable, unionised posts, the number of which he pointed out were declining in Vallejo.

Orcem’s permit application states that the plant would have employed between 20 and 30 people full time.

Locals pointed out that the 190 figure included potential spin-off positions from having the factory based there and disputed the actual total.

1 Will brother’s widow get half of our parents’ estate when they die?
2 Banks face ‘hectic’ loan restructuring as payment breaks end, Goodbody warns
3 Should I switch bank now with Ulster Bank at risk of closing?
4 Irish household wealth grew by €76,000 in years following crash
5 EU said to be leaning towards appealing Apple tax decision
6 House insurance: save yourself money by reviewing your policy
7 ‘I have three children and a dog, so I feel like a bit of a human ATM’
8 Belfast mailbox address used by account holder in Russian money-laundering scheme
9 Finance Ireland refinances mortgages with low level of payment breaks
10 Aldi and Lidl at back of queue during UK pandemic
Real news has value SUBSCRIBE