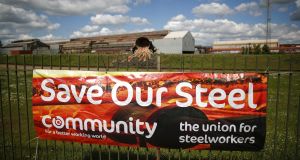 Finance firm Greybull Capital is begging the government to stump up £30 million in emergency loans to match the £30 million pledged by Greybull and British Steel’s lenders. Photograph: Darren Staples/Bloomberg

Bailing out British Steel is one thing – the once proud symbol of Britain’s manufacturing prowess does, after all, directly employ 5,000 people in the UK and a further 20,000 in its supply chain.

But it’s another thing altogether bailing out the steelmaker’s private equity owners, the secretive finance firm Greybull Capital. Surely the financiers, whose game-plan is buying and selling businesses for handsome profits, should sink or swim by themselves without the help of taxpayers’ cash?

Greybull bought the ailing business from the Indian conglomerate Tata less than three years ago, for a token £1, proudly rebranding it British Steel. That name had disappeared in 1999, when the manufacturer merged with a Dutch rival to become Corus, later bought by Tata.

The deal saved thousands of jobs and, within 100 days of the takeover, the new owners were boasting that British Steel was back in the black. That was a dramatic turnaround from the losses of several millions of pounds a month it had been suffering under its old owners, who were criticised for having lost interest in the business.

Now, however – and only partly because of Brexit – British Steel is back on the brink, with thousands of workers fearing for their future as Greybull begs the government to stump up £30 million in emergency loans to match the £30 million pledged by Greybull and British Steel’s lenders.

That’s a reduction on the £75 million originally requested but the two sides looked no closer to agreement yesterday as talks on further funding continued. Just a fortnight ago, the government gave the group an emergency loan of £120 million to cover its European Union carbon dioxide emissions liabilities.

British Steel has assured its employees that it has enough cash for them to be paid in full this month. But what happens after that? Without the cash, the business faces administration, and there were calls for Britain’s second-largest steel maker to be nationalised, as the unions demanded the government “put its money where its mouth is”.

Steve Turner of the Unite union said that success of British Steel was key to any future UK industrial strategy, pointing out that it supplies other UK steelmakers with products and provides 95 per cent of the UK’s rail tracks.

As for Greybull, he said: “If it thinks it is going to run off into the sun with tens of millions of pounds after allowing the collapse of British Steel into administration, it can dream on.

“This is a national asset and we will not allow this to happen.”

Labour leader Jeremy Corbyn said the collapse of the business would be “devastating”.

“If an agreement cannot be struck with British Steel, the government must act to take a public stake in the company to secure the long-term future of the steelworks and protect peoples’ livelihoods and communities.” Corbyn said.

Nationalisation is not on the cards, however, as business minister Andrew Stephenson made clear in the House of Commons yesterday. He said that while “no stone was being left unturned” to help the manufacturer, help would be offered only on commercial terms in order to comply with EU rules.

“Nationalisation is not the solution here,” he insisted.

Of course, there was no talk Tuesday of saving Jamie Oliver’s restaurants empire for the nation, as it collapsed into administration with the immediate loss of 1,000 jobs.

The celebrity chef has battled hard to save his restaurants chain, including injecting £13 million cash into the operation last year.

But, like numerous other retail and casual dining businesses, it’s been unable to withstand the consumer spending squeeze. Dozens of outlets were shuttered last year and yesterday all but three of the remaining 25 UK restaurants, largely Jamie’s Italian, closed their doors to leave just those trading at Gatwick Airport.

The celebrity chef opened his first Jamie’s Italian outlet in 2008, with the laudable aim of “positively disrupting” mid-market dining in the UK high street, offering good value but with higher-quality ingredients and strict animal welfare standards.

The timing could have been better, however, and the business never really lived up to its ambitions. It expanded too quickly and allowed its prices to rise ahead of its mid-market rivals. As it continued to struggle, Oliver attempted, unsuccessfully, to find a buyer. Earlier this year he put another £4 million into the operation.

The famously hard-working entrepreneur retains his other, more profitable enterprises, including his lucrative cookery books and TV shows, along with cooking equipment and homewares licensing.