Manufacturers feel the Brexit effect on both sides of Irish Sea 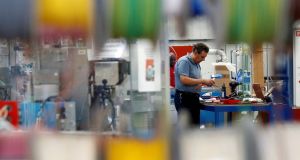 The slowdown marks the end of a period of goods and materials stockpiling that took place ahead of the March date originally scheduled for Brexit. File photograph: Phil Noble/Reuters

Brexit is weighing on the manufacturing sectors in Ireland and Britain, according to indices tracking activity on both sides of the Irish Sea.

The AIB Ireland Manufacturing PMI (purchasing managers’ index), which tracks activity through a range of indicators such as employment and supplier delivery times, improved again in May but at its weakest pace since the period immediately after the Brexit vote in 2016.

The index read 50.4 in May, down from 52.4 in April. A reading above 50 indicates expansion; anything below that points to contraction.

The slowdown marks the end of a period of goods and materials stockpiling that took place ahead of the March date originally scheduled for Brexit, which has since been postponed to October.

Stocks of finished goods declined in May, the survey suggests, as respondents highlighted that they had reduced stocks due to fewer customer orders. Pre-production inventories continued to rise, however, albeit at a softer rate.

“Anecdotal evidence... indicated that many firms had reached their contingency stock levels for Brexit and due to weaker demand conditions, had to decide to run down their supplies [instead of buying more],” AIB said.

Manufacturing employers continued to take on additional staff but employment growth slowed in May to its lowest rate in 32 months, the survey suggested.

In Britain, the manufacturing sector unexpectedly shrank for the first time since the direct aftermath of the Brexit referendum.

The IHS Markit’s manufacturing PMI dropped to 49.4 from 53.1 in April, with the unwinding of Brexit preparations again cited as a factor as the departure date was pushed back.

The reading was weaker than the 52 expected by economists surveyed.

The reversal follows intensive stockpiling as factories built up inventories ahead of the previous Brexit deadline of the end of March. The new exit date is October 31st but there is a chance Brexit could be further delayed, or that the country will crash out of the European Union without new trading arrangements in place.

“The current manufacturing downturn may have further to run and will have negative ramifications for growth in the broader economy in the months ahead,” said Rob Dobson, director at IHS Markit.

Further afield, factory activity slowed in the United States, Asia and elsewhere in Europe last month as the escalating trade war between Washington and Beijing raised fears of a global economic downturn and heaped pressure on policymakers to step up support.

1 Air travel never going ‘back to way it was’
2 Should I switch bank now with Ulster Bank at risk of closing?
3 Will brother’s widow get half of our parents’ estate when they die?
4 ‘Tax war’ will hit Ireland if digital tax talks fail, OECD says
5 Banks face ‘hectic’ loan restructuring as payment breaks end, Goodbody warns
6 Sorry, Domhnall Gleeson, I don’t want to chat to you anymore
7 Challenge to Intel’s expansion plan to be fast-tracked
8 How to connect with people in the age of Covid-19 protocol
9 How good is your phone camera? We put five to the test
10 Deliveries, charges, returns and tax - avoiding the pitfalls of shopping online
Real news has value SUBSCRIBE