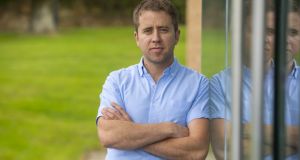 David Hogan is a plumber with 17 years’ experience of dealing with the fallout from leaks, waste and excessive water consumption. Having tried and failed to find a monitoring system that really worked, he decided to design his own and earlier this year the app-based water monitoring system, Smart Flow, was launched.

Hogan started out with a blank sheet of paper and drew up the specification for what he believed would be a best of breed product. He then set about finding someone to bring the concept to life. It took over two years of hard slog and a steep learning curve as Hogan got to grips with mobile app development and sensor technology, but he stuck with it and Smart Flow now employs four people with more jobs to come.

Smart Flow is an “always-on” water monitoring system designed to help businesses avoid leaks, keep tabs on usage and control the flow of water into their premises in real time. There are two sides to the technology: a hardware component that involves ultrasonic flow sensors being fitted to pipes and the smart monitoring and leak detection that’s whirring away in the background 24/7.

“I have been into thousands of homes and businesses over the years and I’ve seen the cost and damage incurred due to excessive water use and leaks at first hand,” Hogan says. “Water bills can have a massive impact both financially and mentally on people and Smart Flow saves business owners time, money and gives them peace of mind. Our system constantly monitors flow to benchmark water usage against norms. It can also send instant alerts if there’s a problem such as excessive usage if someone leaves a tap on for example. It can turn off the water in a property automatically if a leak is detected and it also monitors water usage history via the app or a dashboard.”

Hogan says that many businesses rely on manually checking water meters if they have a problem with excessive usage or leaks. However, this is time consuming and doesn’t give them any meaningful data to work with. “There are mechanical meters on the market but they’re not sensitive enough and they’re also prone to failure,” Hogan says. “Smart Flow uses ultrasonic technology so we’ve no moving parts, which greatly increases our product’s reliability and life span. Our technology also allows us to detect small leaks that most existing meters cannot pick up. We can detect at levels as low as 10ml/m compared to 300ml/m. What we’re offering is unique and it works for multiple properties and multiple users.”

Hogan estimates that Smart Flow will save a business about 30 per cent on their water usage a year and because people know it’s there they also become far more conservation conscious. “By 2030, some 47 per cent of the world’s population will live in areas of high water stress and the UK is expected to run out of water in the next 25 years as demand exceeds supply,” says Hogan who sees the UK as a big potential market for his product.

Investment in the business to date has been about €500,000 which has come from Hogan with support from the NDRC and Enterprise Ireland. Hogan is currently participating in the NDRC’s accelerator at the ArcLabs innovation centre at Waterford Institute of Technology with a view to preparing his business for investment. The company is aiming to raise about €750,000 to build out the team and start scaling up its commercial operations.

High water usage businesses such as franchised restaurants, pubs and cafes are the company’s initial target market with other sectors and the domestic market to follow. Smart Flow will make its money by charging a once-off cost for the hardware installation and a recurring monthly monitoring fee.