We might as well join the ranks of the climate naysayers

There’s an essential ingredient missing from Lapland this year. Snow. 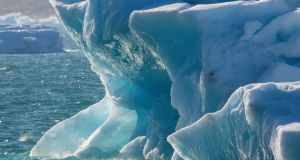 Anyone considering a trip to Lapland and a chance to visit Santa’s headquarters this autumn? The elves and reindeer await you, but there is one ingredient missing from this festive scene. Snow.

There have been no snowfalls so far in most parts of Lapland during October, a month where typically there should be a good 20 to 30cm on the ground and plenty more on the way. You probably don’t need to pack the snow boots if you want to visit early in the season. And skip the parka this year, a good sweater and jacket should be enough to keep you warm given the two week weather forecast suggests temperatures will be hovering between -2 degrees at night and 3 degrees during the daytime. The average temperature in Lapland during October this year has been a balmy 4 degrees.

Finland wasn’t the only place in the far northern latitudes that were experiencing unusually warm weather. The Arctic has been a frozen wasteland for all of human history but that is rapidly breaking down to such an extent that in many parts of the region you might not have been able to freeze ice cubes during the daytime with temperatures well above the long-term average.

Conditions in the far north are changing. What used to be frozen is now thawing and is doing so remarkably quickly. Scientists are struggling to understand the reasons for the meltdown and where such a dramatic planetary-scale event is going to take us.

The Arctic is under constant investigation, particularly in these days of climate change driven by human activity. There are a great many research groups monitoring what is going on using satellite data, oceanic data, snow and ice levels, atmospheric studies and ice cores, amongst others.

The National Snow and Ice Data Center at the University of Colorado Boulder in the US is just one such body, one that is well known and respected for the quality of its research. Its primary mission is to monitor temperature and weather conditions and rises and falls in yearly snowfall and sea ice cover across the Arctic. Sea ice extent is all about measuring small changes in the amount of ice both land anchored and floating on the surface of the Arctic Ocean.

All through the summer the Arctic ice melts but each September a day comes when the amount of ice stops shrinking and starts to grow again as average temperatures start to drop. The big question these days relates to how much ice was lost before the autumn cooling came to stop the loss. This year the change came on September 18th and scientists at the snow and ice centre reported on October 3rd. The Arctic sea ice reached a minimum on that day averaging 4.15 million sq km, the second lowest cover since satellite records began 41 years ago.

This year is now almost tied with ice extent in 2007 and 2016. Ice loss is related to ambient temperature and the snow and ice centre measured the exceptionally mild conditions during the month of September over the entire Arctic Ocean and its surrounding lands. Air temperatures for September were 2 to 4 degrees above the 30 year 1981 to 2010 average over the ocean region. And a temperature peak of 4 degrees was hit over the Beaufort Sea north of Alaska and over the Yukon and eastern Alaska, the snow and ice centre researchers said.

There are many, far too many, who see benefit for themselves in dismissing the data from the Arctic and choosing to disregard it. There are decades of data and tens of thousands of reputable scientists working around the world to understand the warming and find ways to protect against the impacts it may have. They often claim the scientists are in disarray and presenting conflicting views but this is a debating ploy.

There is virtually no disagreement between scientists about climate change and human responsibility for it. And they are pretty much agreed about what comes next in terms of more frequent major storms - including hurricanes in Ireland - changing precipitation patterns and torrential rain, lots and lots of rain.

Our own Government agrees with the accuracy of this scientific consensus and has introduced “action plans” for how to mitigate the impacts and has organised lots of press gatherings about how we are to reduce our carbon footprint. Yet we might as well join the naysayers and start arguing against the reality of climate change as seen in the Arctic but also in the typhoon-ridden Pacific, in Antarctica, in mountain glaciers in Europe, North America and India and the list goes on.

The Environmental Protection Agency knows the reality of the situation. On October 23rd it released the latest statistics that showed we as a country are falling further and further behind on our carbon reduction limits as set down by the EU. The 2018 figures show we have blown our greenhouse gas limits for the third year in succession. We were five million tonnes over our limit in 2018, and we exceeded the 2017 limit by three million tonnes.

If the Government believes the science behind climate change is real then why do we continue to break the limits? The Government was quick to accept we are in a “climate emergency” but is not responding as if we really are in the midst of an emergency.