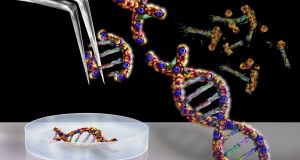 Researchers are using the gene-editing tool Crispr to turn bacterium’s machinery against itself, or against viruses that infect human cells.

Irish Times readers have voted for advances in gene editing as their innovation of the decade in an online poll.

The ability to alter how genes work is expected to lead to multiple ways of tackling diseases in the future, along with the ability to develop new variants of crops.

The scientific innovation won out with 33.8 per cent of the vote against smarter phones, which secured 22.5 per cent. Improvements in battery technology came third with 17.5 per cent.

Altering a bit of text on a page can change its meaning: fixing a typo, perhaps, or replacing a word that doesn’t quite work. Now scientists have figured out how to precisely target edits in the “letters” of DNA in a cell with a system called Crispr-Cas9. Since it became more available as a tool for scientists in 2012, Crispr-Cas9 has been widely adopted in labs, where it provides a precise way to alter DNA in cells.

Researchers are using the gene-editing tool Crispr to turn bacterium’s machinery against itself, or against viruses that infect human cells.

The technology comes with enormous ethical implications, particularly when applied to humans. News that Chinese scientist He Jiankui had edited the genomes of twin baby girls, who were born last autumn, was greeted with outrage by the scientific community.

Used responsibly though, Crispr-Cas9 is enabling a deeper understanding of how genes work and could revolutionise healthcare and agriculture.