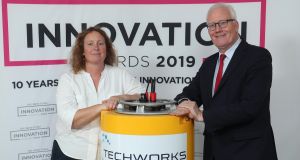 The CoastEye Mini-Buoy is a small, portable buoy which contains a number of sensors and can easily be deployed in coastal environments for a few months at a time to monitor the marine environment. The sensors connect back to the cloud-based CoastEye platform for data analysis, visualisation, processing and dissemination.

The Mini-Buoy and accompanying CoastEye platform were developed by Irish company TechWorks Marine which has been in the business of coastal monitoring technology for the past 15 years. “We are a marine technology company, but we are really more a marine data company,” says co-founder and chief executive Charoltte O’Kelly. “We make and integrate technology to gather information on the marine environment and we provide clients with live data.”

The company works for a range of clients in the public and private sectors including public bodies like Dublin Port. “We are supplying them with robust, reliable real time data from sensors in the marine data,” says O’Kelly. “A lot of what we do is in the coastal zone area. Technically this extends to 50km from the shore, but we are mainly concerned with the zone from the shoreline to the horizon. We can help monitor the impact of water treatment plants, desalination plants, marinas, and so on.”

She gives the example of dredging as a use for the technology. “Port authorities and other coastal zone users need real time information on the turbidity of water to comply with their permits. This is an indication of water quality.”

But size is an issue. “When you put something on a boat, costs start spiralling out of control. A typical buoy is three metres wide, four-five metres tall and three-four metres below the surface. You need big trucks to move them around on land, you need big ships at sea, and you need big anchors.”

The company had been discussing the possibility of creating a smaller machine with the Environmental Protection Agency (EPA) and others. “We thought it would be cool if we had one that you could put in the boot of a car,” she says. “We are talking about small, not miniature. It has to survive storms like Emma with 15-metre waves. The main difference with our large product is that she is quite small. She weighs 35-40kgs so it’s like carrying a seven-year-old child. One person can easily carry it a short distance and two people can carry it quite far. You can plug in up to three sensors. In the future it will be four.

“All our competitors have one multiparameter sensor on their smaller buoy. Ours can take a multiparameter sensor but you can also plug in a current meter to see where the water is coming from and where it is going to. You can also add one to test for phosphate, nitrates or E.coli. This helps deal with issues like Ringsend and the E.coli problem there. It’s a big scientific package with multiple data inputs.”

And it can survive the harsh conditions to be found in Ireland’s coastal waters. “The EPA has had one in the water for six months.”

Its appeal is not limited to Ireland. “We are addressing a global market. Two-thirds of the world’s megacities are situated in coastal areas and depend on coastal resources and they need to monitor those resources,” O’Kelly notes. “We are at the Wetex trade show in Dubai at the moment demonstrating the Mini-Buoy is 40 degree Celsius water.”

Development work on the Mini-Buoy started just 18 months ago. “We are now on the third iteration since the initial prototype and we are happy that it is a commercial product,” she says. “We are currently developing a sales implementation plan for it. Marine monitoring is not a mass market business and production will be in the tens rather than hundreds or thousands.”

The development process has been very important. “You have to get it right. We had to make sure that it is useful for coastal zone regions and users of coastal zones. It provides them with data they can use to help them carry out their day-to-day activities. We have a huge resource called the ocean which covers 70 per cent of the globe. Ireland is very privileged to be an island nation with a small population. Ireland should be developing marine technologies and exporting them to the world.”