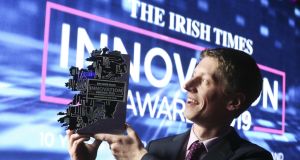 Galway-based medtech company Atlantic Therapeutics has won the Irish Times Innovation of the Year award 2019 for developing a non-invasive, long-lasting solution to bladder weakness and other disorders associated with pelvic floor muscle problems.

As many as one in three women and one in 10 men suffer from urinary incontinence, primarily due to weakened pelvic floor muscles. The condition often goes untreated and unreported due to the embarrassment involved and the stigma felt by patients.

Atlantic Therapeutics’ innovative device, Innovo, is similar in style and feel to a pair of cycling shorts and works by strengthening and rebuilding the pelvic floor muscles.

Earlier this year the company raised €28 million ahead of a move into the US market just months after receiving FDA approval for its flagship Innovo technology platform.

The Irish Times Innovation Awards, which are now in their 10th year, were presented at a ceremony attended by more than 200 people at the RDS in Dublin on Tuesday night. Atlantic Therapeutics won in the Life Sciences and Healthcare category before going on to claim the top accolade ahead of four other category winners.

More than 100 companies took part in the awards this year.

As overall winner, Atlantic Therapeutics wins a communications package worth in excess of €150,000 and a scholarship for two executive development courses from UCD Smurfit Business School commencing in 2020.

The company, which is based in Parkmore Business Park, was founded in 2015 when it spun out of Bio-Medical Research, the company behind Slendertone. Innovo works by delivering 180 pelvic floor contractions in every 30-minute session to patients.

According to global product manager Danny Forde, “it’s a prescription-only device in the US at the moment and our aim is to achieve over-the-counter status this year. We are also up and running in a number of European markets including Ireland, the UK, France, Germany and Spain, while we recently finalised a distribution deal in Scandinavia.”

Finalists from the west of Ireland claimed four of the five category awards.

PEL Waste Reduction Equipment, based in Balla, Co Mayo, won the Manufacturing and Design category for its innovative solar-powered compacting litter bin, BriteBin, which increases its capacity by up to 10 times the volume of a standard street bin.

University of Limerick-based FarmHedge won the IT and Fintech category for building a technology platform that enables farmers and agri companies to engage in fast and personalised communication across the agriculture supply chain.

Fellow Limerick-based company Electricity Exchange won the Sustainability category for developing a system to maximise the revenues that can be earned by companies which are on standby to resolve frequency deviations on the national grid.

Biotech company Auranta, a spin-out from NovaUCD, won the New Frontiers category for developing a range of animal feeds which boost the immune system, reduce the need for antibiotics and significantly reduce mortality.